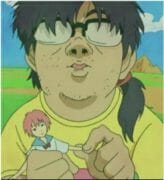 Earlier today, I took a trip to Cambridge, specifically Harvard Square for a change of scenery. While most of the day was eventful, the last leg of the outing really made me start to think.
The end of the trip saw us heading into Tokyo Kid, on JFK Street. For those that have never been, it’s a small shop that stocks primarily anime goods like toys, CDs, and a few DVDs. It’s a nice place, and the people are good, so I try to stop in whenever I’m in the city. I recommend stopping in, if you live in the area!
Anyway, back to the point at hand. I was browsing through the store’s selection of soundtracks, and things were quiet, aside from the show running in the background. It was actually kind of pleasant. Then, reality hit and hit hard. The silence was broken by two obnoxiously high-pitched cries of “OHMYGOD KYAA!”, followed by tromping of running footsteps – note that this store is about the size of your average mall Gamestop: there’s not a ton of room to run. This was punctuated by loud chatter that consisted of nonsensical phrases like “touch me, I’m about to faint!” and random fangirl gibberish. I looked over, expecting to see, well, a pair of teenagers at least. Instead, I was taken aback when I saw two grown women – old as I am, if not older, screeching and giggling like little girls.
Now, I’m all for getting excited for one’s hobbies. I’ve definitely gone and let my inner fan out at conventions and other events (you should’ve seen me at the JAM Project concert at Otakoon 2008!). But there’s a time and a place for everything. Frankly, I was embarrassed at this point, since the realization quickly sank in that people like this were representing us. The perception that anime fans were out-of-touch Japanophiles definitely comes from somewhere, and it’s individuals like this that define it. This is a simple plea to the fanboys and fangirls out there – be fans all that you want. That’s awesome – but also act like normal people. Screaming and squealing like fanboys and fangirls while spouting off broken Japanese catchphrases in a crowded mall is far from normal, and even further from rational.
Long story short: We anime fans a big, dysfunctional family. Don’t be weird cousin Ed.