The content of this piece was written during a viewing of the first episode of Tokyo Majin on September 4, 2010. Edits have been made for spelling and grammar, but the rest is completely untouched, and un-edited from its original format.

A better title for this series would have been “Boy George Vs. The World.”

4:15 PM: Tokyo Majin is another of [email protected]’s license rescues, and was originally released by ADV Films.

4:16 PM: And it opens with an old guy holding a crying baby…. as (apparently) his father(?) gets killed

4:20 PM: Title: “TOKYO MAJIN GAKUEN KENPUUCHO – TOU!” >:o …this could be really cool, or really REALLY crappy. Dunno which yet.

4:23 PM: “Every last drop of water’s been sucked from her body :o” so… thirsty zombies?

4:26 PM: Out the window Kyoichi and narcoleptic transfer go… and blonde English teacher is still awesome

4:28 PM: “It can’t be normal people doing this.” “We can’t be certain they’re people :3” This bald dude is sharper than the average yakuza

4:33 PM: Brunette from the beginning has a name and identity now – Aoi Misato, student council president

4:34 PM: Day gives way to night, and the city lights up as people go to their own personal hells. Classy.

4:40 PM: Kisaragi has a cute manservant. She likes her man-candy I guess :P

4:45 PM: Let the zombie beatdown begin as Komaki sports new tattoos… they all do. wtf.

4:47 PM: Zombie Yang … and Kyoichi has his bloody zombie-killing sword.

4:48 PM: …who’d have thought that Boy George was a demon capable of killing dozens at once?

4:54 PM: Verdict: Frankly, I’m bored with it. The sheer stupidity of the situations presented, and the unlikable cast are big turn-offs.

4:54 PM: Throw in a tone that refuses to really commit to horror, or action, or school mystery and you just have a jumbled, obtuse mess.

4:55 PM: Avoid this unless the sight of Boy George laying waste to Tokyo is REALLY high up on the “Shit I need to see” list.

Tokyo Majin is currently available through FUNimation.
The full series can be purchased on DVD at The Right Stuf International. 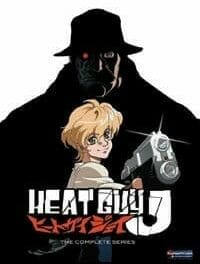