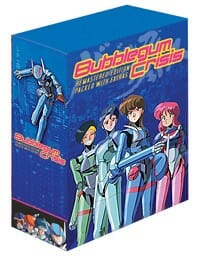 The content of this piece was written during a viewing of the first episode of Bubblegum Crisis on September 29, 2010. Edits have been made for spelling and grammar, but the rest is completely untouched, and un-edited from its original format.
I’ll admit that this is one of my favorite shows of all time. Still, I won’t let something like that get in my way of ripping it a new one!

9:02: This makes the question of the night “Does it hold up well eight years later?”

9:06: Starting off in a sunset shot of MegaTokyo

9:06: While the city glitters in the night

9:07: And sirens in the background as the helicopter continues

9:07: I forgot how gorgeous some of these backgrounds are. Absolutely stunning detail

9:08: And a flythrough – girl in Sylia’s dress shop, aerobics class with Linna, hobo on a bus…

9:09: And real Priss working on her bike

9:10: Now is a good time to mention that I miss cyberpunk.

9:10: As we see Priss getting ready for her show… saabisu saabisu!

9:11: The ’80s music is definitely one of the high points of the series

9:11: Oomori Kinuko at her finest, and amazing animation to really set the mood

9:12: You can really tell that they didn’t have a budget for this. Simply outstanding animation

9:12: And the cuts to the AD Police hunting down a rogue Boomer really help sell the feel of this series

9:13: Fun fact: The dub for this show was atrocious, but the dubbed songs were actually really, REALLY good

9:14: And we have the precursor to Master Chief gunning down Frankenstein. How nice. T_T

9:17: And the music fun is over – AD Police officer Leon’s heading to the scene, and so are everyone’s favorite vigilantes

9:17: And some epic shots of hardsuits

9:19: Oh yeah – Priss DID have a robot, didn’t she? Wonder what happened to that

9:20: “This one’s different… a whole new breed :o” …and he runs headless o_o Boomers are like chickens I guess

9:21: “This is something – getting to make friends with you :D” Presumptuous, I see

9:22: “Instead of chasing girls’ asses, go for some Boomer butts!” Double burn! Priss, YOU ARE THE BURN MASTER >:o

9:23: Off to some random military peoples now… talking about the Knight Sabers

9:23: And apparently, the military is corrupt… SHOCK OF SHOCK!

9:24: And the president of GENOM looks like John Boener… with bad fashion sense

9:25: “Don’t forget that Genom is a respectable company!” Oh… one of THOSE deals

9:25: Random scene of Sylia swimming… why? No reason

9:27: And the other scientists have mullets – business in front, party in back, douche all over!

9:27: “We’re making something to help mankind with Boomers :D” -flash to crime scene- Suuuuure ya were.

9:30: …Mackey is a creepy bastard. You don’t stare at your own sister’s tits T_T That’s creepy!

9:30: And off to Silky Doll Lingerie store, where Nene’s browsing and Sylia looks bored

9:32: And off on the way to the USSD Sylia and Nene go… IN their hardsuits. SMRT

9:36: And the Knight Sabers are GONE – replaced by two womens :O WHO WOULD KNOW :O

9:40: This show sponsored by Heineken, apparently

9:42: And boomers apparently have jets now

9:43: And it just so happens that Leon is cruisin’ by, to see Priss ride by, followed by ROCKETBUMA

9:44: And Leon has a biiiig gun. WOnder if he’s compensating

9:45: And back to Priss, who’s running through the dark

9:45: And she finds the kid, who’s drawing… a full-scale map of MegaTokyo?

9:47: And everyone else is suitin’ up… as Priss gets surrounded

9:47: They apparently have motorcycles – which they could’ve used instead of the fucking BUS

9:49: More shots of the Knight Sabers on their motorcycles

9:49: “Apparently, you know nothing about Cynthia :o” nope

9:51: And Frederick is apparently a tentacle monster o_o

9:51: A tentacle monster that absorbs buildings

10:01: Only to get tangled by the tentacles of the beast

10:02: That gets blown to bits. But not before it tries to suck in the girl

10:02: Something tels me that satellite’s gonna… yep

10:02: Aqua City is now rubble, and the Knight Sabers must now escape an explosion

10:03: Again, the destruction here is simply amazing to see.

10:06: The OVA has this cinematic quality to it – the feel of a big-budget flick, but the crazy fun of cyberpunk.

10:06: For the love of god, if you haven’t seen this yet – please, do yourselves a favor – watch Bubblegum Crisis.

Tenchi Universe is currently licensed for distribution by AnimEigo.
The series can be purchased at Right Stuf.