2005:
In Japan: NIT Solmare began offering Go Nagai’s Devilman to cell phone users via DoCoMo’s Comic i and Vodafone’s Comic Seymour services. Through the services, the manga was offered both in “normal” form and enhanced form with sound effects. The service was only available to users of specific owners of either phone. 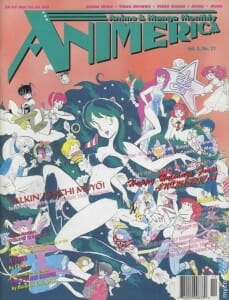 2000:
In the US: AnimEigo announced preorder prices for their Super-Dimension Fortress Macross boxed set. To celebrate the show’s passing 7,500 pre-orders, AnimEigo announced that they would ship sets to early adopters for the low price of $250. While this sounds steep, the show shipped with a retail cost of $360. Still think anime is too expensive?
In Canada: Toonami announced that they would air Mobile Suit Gundam Wing: Endless Waltz on November 10. This was particularly interesting because YTV actually didn’t finish airing the TV series before announcing the film.
In Japan: Haruki Kadokawa, former president of Kadokawa Shoten, resigned from his position after being convicted of importing cocaine.
In Indonesia: Doraemon celebrated its 10th anniversary of broadcast in the country.
1995
In the US: Animerica’s 33rd issue shipped, with a cover feature of Urusei Yatsura.
In Japan: Gunsmith Cats’s first OVA hit retailers four days before, on November 1. It’s a few days late, I know, but Gunsmith Cats is so fantastic that it deserves mention. ;)