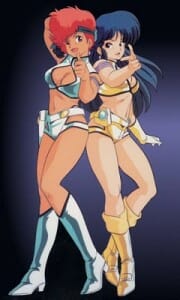 Over the past year or so, we’ve seen a huge resurgence of older, classic anime titles. Earlier this year, we saw Fist of the North Star and Dairugger hit American DVD for the first time. Just last month, we saw Dirty Pair TV makes its US debut, and many are looking forward to the American premiere of Ghost Sweeper Mikami (the TV show, not the movie) in about a week and a half.Granted, this is only four titles out of the many that hit every year. However, to see them finally being released, talked about, and even making the best seller charts on TRSI and Amazon (as of writing, Fist of the North Star was #75 on Amazon’s Anime best sellers) makes me smile.
It seems like fans across the board are starting to open up to the classics, even if it’s only a little bit. I hope that this trend continues, and hobbyists across the board start showing a real desire to delve deeper into the past with their anime. In fact, I’ll be one of the first to encourage it. I won’t sit here and objectively scream that older anime is better than new stuff, or that all new shows suck. I can’t help but think that’s a problem that we’re seeing in fans in general. But that’s another story for another day.


As a fan of classic anime (’80s shows in particular), I recommend that curious fans indulge and check out these titles. They are a product of a bygone era, when budgets were high, studios were fearless, and cels were more than just some strange relic of the past. These new releases are a perfect opportunity to sample some of the finest offerings of a now-fading era,
I know it sounds like I’m making some strange sales pitch, but that’s definitely not the point. Really, I’m just hoping that this recent trickle of classic shows inspires at least a few fans. Some of these shows were key in the joining of the fandom for many of us. Just like this generation’s Naruto, or One Piece, or Bleach, shows like Dirty Pair and Robotech were something that was able to make a whole generation of fans take notice.
I don’t expect all of the hold-outs to suddenly change their minds, since some will always look at “old” as “busted.” It’s just how it is. But I’d be thrilled to see some younger fans express the same excitement for the older stuff that a lot of us old farts do.

In the Interest of Full Disclosure…