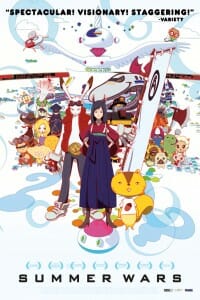 2010
In America: FUNmation announced the theatrical release dates for Mamoru Hosoda’s Summer Wars. the film will open in the following locations:
2005
In Japan: Kadokawa announced that they would launch an adult-oriented version of Newtype on November 25. the magazine was set to coincide with Newtype’s 20th anniversary, and woudl cost 580 yen. The first issue was bundled with a UMD (remember when they were still relevant?) for Blood+.
2000
In America: Sci-fi.com closed its Anime Colony website. While Anime Colony was seen as a success at the time, restructuring prompted by over-spending caused the site to be closed. The site, which once served as a resource for over 1,000 reviews, was a key sponsor of the year’s New York Anime Film Festival.
In Japan: AX Magazine announced that a Hand Maid May OVA was in production. The episode would be presented as the final episode of the series.
In Japan: Bandai announced that they would launch a PC Wallpaper downloading service on December 1. Through the service, users would be able to download wallpaper images of Gundam characters and mecha. Each wallpaper would cost 300 yen. 1998
In America: Not quite November 13, but the first issue of Animerica Extra shipped to stores around this period (it’s nearly impossible to track magazine ship dates). The magazine was one of America’s first monthly anthologies, and featured chapters from Steam Detectives, Fushigi Yuugi, X/1999, and Video Girl Ai.X/1999 would later be pulled from the magazine due to licensing issues. However, the magazine would also become the monthly home to titles such as Revolutionary Girl Utena, Chicago, and Marionette Generation.
1993
In Japan: The Bono Bono anime film opened in theaters. The film was animated by the now-defunct Group Tac (Night on the Galactic Railroad), and written and directed by creator Mikio Igarashi.
1991
In Japan: Dragon Ball Z sailed past the 100-episode mark, as episode 101 – “Gohan’s Brief Chance for Victory!! Blast the Makyo World” aired. The US wouldn’t see this air on TV until nine years later, on May 27, 2000.