It's better than syphilis! That's something... right?

Christmas is a huge holiday in Japan. However, the way they celebrate the holiday would seem alien to most westerners. Familiar icons like Santa Claus and festive trees are present, but so are somewhat unique traditions, like Christmas Cakes with Daiku (Beethoven’s Ninth Symphony). Also unique to Japan is the idea of multiple Santas. The idea was toyed with before, in Ai Yori Aoshi’s Miyuki feature, among other anime titles. Love Hina creator Ken Akamatsu, however, decided that he wanted to offer his own idea of the holiday spirit. Something a bit less family-friendly, and bit more “bad touch” in its execution. From that drive, Itsudatte My Santa! was created, and a new meaning to the term “crazy Japan” was born.

My Santa revolves around a lad named Santa. He was born on Christmas Eve, and his parents are the stereotypical absentee type. The whole “parents not caring” thing apparently led to a complex, as Santa is a dejected, Christmas-hating grinch. His life changes, however, when a cute brunette propositions him in a crowded square. After a moment of humiliation, the girl explains that she is Santa Claus. Well, a Santa Claus. For the sake of clarity, her real name is Mai, and she carries a plush reindeer named Pedro.
…Are you lost yet?
Anyway, the first episode revolves around Mai making Santa feel the Christmas spirit, in some form or another. The end

result is that she becomes a full-fledged Santa who, in Akamatsu’s mind, is apparently blonde, busty, and very cold. Aside from a few humorous sight gags (Mai can only make or do things that start with an S, like saugus, sample changing rooms, and san-setsu-bo (three-sectional staff)), the experience proves to be far more disturbing than heartwarming. Mai drags poor Santa through the first episode like an adorable Kool-Aid Man, uttering a creepy “Ho ho ho!” at every turn. The second half sees her practicing the wonderful art of breaking and entering, as she slithers down chimneys and delivers gifts.
There seems to be little rhyme or reason to the show’s progression, as characters appear out of nowhere, only to completely disappear moments later. Major plot points are badly placed, and leave little impact on the viewer as they’re thrown out.

The second episode makes even less sense, as Mai is stranded with Santa, and therefore forced to spend a year in the human world. Mai’s sister and rival appear to cause trouble, and predictable not-quite-hilarity ensues.
Commendations must be given to Aya Hirano (The Melancholy of Haruhi Suzumiya, Lucky Star) for her performance of Mai. She really gave life to the character’s corny dialogue, especially the random “Ho ho ho”s that are randomly inserted in the script.The rest of the Japanese cast seemed less enthusiastic about the roles they were given. The English dub is absolutely atrocious, with stilted dialogue and a cast that simply doesn’t emote. (Of course, given the material, I wouldn’t either!)

While it’s not the worst possible way to spend a lonely Christmas night, the same could be said about syphilis or a drunken stupor. My Santa is blatantly stupid, and shameless in its fan service. Those looking for a short dose of the Christmas spirit should stick to Charlie Brown or Rudolph. If one must mix some anime into the mix, I highly recommend Ai Yori Aoshi’s Miyuki, or the Captain Tylor OVA White Christmas. Both are excellent features, and leagues above the dreck that is My Santa. 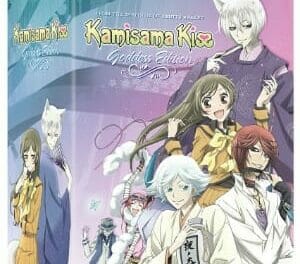