2010
In Japan: The cover for the next issue of Shueisha’s Jump Square reveals that an anime film based on Takeshi Konomi’s Prince of Tennis is currently in the works.
2009
In America: Amazon.com nominated volume 9 of Eiji Ohtsuka and Hosui Yamazaki’s The Kurosagi Corpse Delivery Service for the Best Book Covers from a Series award. 60 covers were nominated across ten categories, with Kurosagi Corpse Delivery Service being the only manga title in the running.
In Japan: The Mainichi Shimbun revealed that a special Christmas Tree would be erected in Akihabara on December 3. 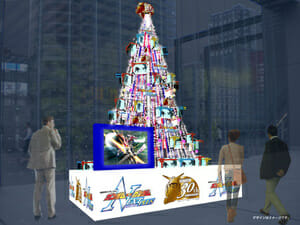 The tree, which stood at roughly five meters, was composed of over 60 plastic Gundam models. In addition, the tree was lit in the franchise’s signature colors of Red, White, and Blue. Amuro Ray’s voice actor, Tohru Furuya, lit the tree, and took photographs with the first 100 people that purchased Mobile Suit Gundam: Gundam vs. Gundam Next Plus for PSP, which released on the same day.
2007
In America: Viz Media announced that they would open a theater in the then-upcoming J-Pop Center in San Francisco’s Japantown. The Viz theater, actually became a 143-seat location known as Viz Cinema in New People. Since the theater’s opening, it served as host to a number of anime and Japanese live-action films, including Nana, Death Note, Detriot Metal City and the two Patlabor films.
2007

In Japan: Ai Yazawa resumed work on the Nana manga. Earlier in the year, Yazawa fell ill, and underwent surgery. Yazawa announced a return to the series three times, but was forced to delay each time. To mark the series’s return, Cookie Magazine featured a special Nana cover illustration, a full-color opening for the installment, and an offer to receive a Tosho gift card, as well as a Christmas postcard via mail.
2006
In America: Seven Seas announced that they acquired the domestic rights to He is my Master and Sota-Kun no Akihabara Funtouki. Both titles had projected release dates of mid-2007.
In Japan: The website for Ikkitousen: Dragon Destiny opened today. Print adverts already spoiled the existence of the series, which hit Japanese airwaves on February 26, 2007.
2002
In America: IC Entertainment announced that they would begin publishing AmeriManga, an anthology of manga-style comments drawn by American artists. The anthology launched the next month, with the following titles:
Reman Mythology by Amy Kim Ganter, and Warmth by Fred Gallagher joined the magazine in the fourth issue
1998.
In America: ADV Films announced that they acquired the rights to Queen Emeraldas. The hit stores on VHS and DVD on November 23, 1999 and was ADV’s second DVD release.