For my second Christmas Episode highlight, I’ve decided to kick it old school. Urusei Yatsura’s Christmas special is interesting, in a sense that it’s both early in the series (episode 10), and it’s one of the first episodes to portray Lum as anything other than a carefree yet intensely vindictive space invader.

The episode starts off with the simple cookie-cutter plot point – Ataru wants to look up girls’ skirts, Lum doesn’t approve, and Ataru’s friends get jealous. The episode really starts to diverge shortly after this, when Ataru’s pals decide they’ve had enough, and want Lum to themselves once and for all… after drowning their rage in cheap ramen.

To break the two up, Ataru’s friends hatch a plot so absurd, so stupid that only a total moron would buy it… so it was tailor-made for Ataru. The guys write a love letter to the hapless pervert from a fictitious person to ask him on a Christmas Eve date. the lucky lady’s name? Kumino Otoko – roughly translated, that’s “The guys in class.” Ataru, being an asshole, accepts right in front of Lum, and heads off to plan his perfect Christmas Eve. The guys, meanwhile, plot to, I dunno – kill him, or something, as they hire some girl to play Kumino, get newspaper photographers, and even Lucha Libre wrestlers involved. Everything seems to be going perfect, with all manner of crazy sterotypes ready to make Ataru’s life hell. As one can expect (seeing as there are 185 episodes after this one), Lum finds out, and steps in for a, er… now-incapacitated Kumino Otoko. She drags her hapless honey out of the fire, and into a special Christmas date that neither would forget. 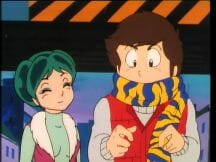 This stands out as one of my favorite Christmas episodes of all time, since it shows a side of Lum that really doesn’t arise often. She stands out as strong and wrathful still, but displays a softer, more sympathetic side that really fleshes her out as a character. the Christmas imagery is a bit subdued, when all is considered. It’s limited to a few exterior backgrounds. The soft holiday tunes in the background are more vital to setting the mood, as their subtle, yet sweet tones set the mood, and provide accents to the more subdued segments.
This stands out as one of my favorite Christmas episodes, and one of my favorite Urusei Yatsura in general. the sweet finish and more sedate tone are a welcome contrast to the rest of the show. Frankly, I found myself wishing that there were more episodes like this as the show went on, as it was one of the first to really give some insight into Lum under the surface. 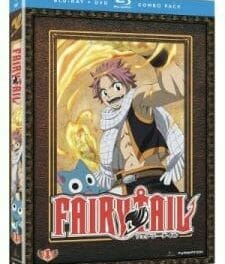