Now that you’ve heard me drone on and on about the basics, I’m sure you want to finally just watch some anime. Last chapter, I mentioned that it’s vital to follow the common-sense solutions when looking for a new title. However, this chapter, I’d like to give a more concrete footing of places to start. For this chapter, I surveyed a number of individuals, from new fans to long-time viewers. I’ve combed through the results, and compiled a list of starting points that covers most of the popular genres.
All of the titles mentioned below are available either on DVD, and include a link to an online retailer that stocks the item.

Afro Samurai
Genre: Action, Adventure
What is it? Afro Samurai travels through a futuristic feudal Japan, searching for a man known only as Justice. Justice is a skilled gunman, who murdered Afro’s father when Afro was just a boy. Of course, Justice is also a skilled gunman, and the strongest man in Japan. In this world, only the second strongest can challenge the top fighter. And, while Afro is the current #2, this means that he has to make his way to Justice’s lair, while staying alive through the countless challenges are sure to come for the coveted rank.
Why this? Afro Samurai is a title that was almost tailor-made for the US market. The series has a quick-moving, well-written plot, gorgeous animation, and Samuel L. Jackson. What’s not to love?

What is it? College student Keiichi Morisato is a bit of a loser – he has no luck with women, clubs, or any of the social activities that involve human interaction. However, his fortune changes forever, when a wrong number sees him in a relationship with Belldandy, a literal goddess. Now, it’s up to the two of them to make this relationship work out, while dealing with supernatural threats, Belldandy’s overbearing sisters, and final exams.

Why this? It’s a simple, sweet story that won’t win a ton of awards, but it does what it sets out to do well. The romantic antics serve as a great backdrop for the larger, more urgent plot. 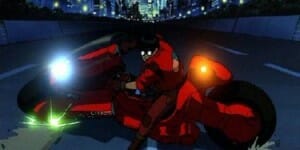 What is it? Thirty years have passed since World War III began. Neo-Tokyo is in a constant power struggle against the criminal underground that controls the city. A child, a secret experiment from the government, manages to break free of the custody of his government captor. His daring escape is far from that, though, and he manages to get a gang of local ruffians involved in the conspiracy as he triggers the psychic abilities of the gang’s youngest member, Tetsuo. Tetsuo is taken into custody, where his mind is twisted, and he begins to formulate his revenge on the world.

Why this? It’s hardcore science fiction presented in a form that is intriguing, but not overbearing. The strong writing, excellent visuals, and fantastic score serve as perfect accents to the plotline that straddles the border between drama, action, and political thriller. 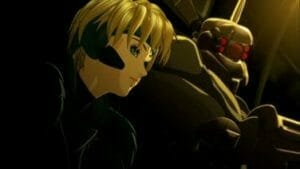 What is it? In the aftermath of a global war, the shining city of Utopia arises. In the city, humans and bio-mechanical beings known as bioroids live together. Peace, love, and harmony seem to be the city’s modus operandi, but tensions are growing beneath the surface. Deunan Knute, a survivor of the war, enters the city of Utopia, and comes to understand that she holds an important role in the future of mankind.

Why this? The series is a sleek combination of gorgeous animation and excellent electronica music. The action sequences are simply fun to watch, and the dramatic sequences play off of the emotions well. 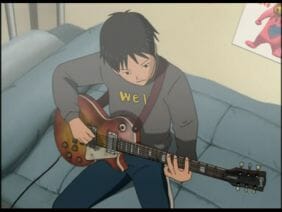 What is it? Koyuki is a 14-year-old that’s going nowhere fast. However, his life changes after he saves an unusual dog, which leads to a run-in with his owner. The dog’s owner, Minami Ryuusuke, is a famed guitarist looking to start a new band, named Beck. As Koyuki and Ryuusuke work to get things off the ground, Koyuki’s life begins to change as he and the band struggle to break into stardom.

Why this? The show is a straight-forward coming of age tale, with an excellent soundtrack. It’s accessible, but it never delves down to condescension or pandering. 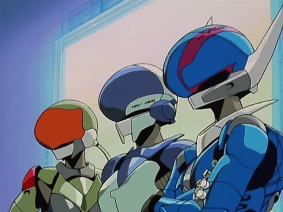 What is it? The Knight Sabers are a team of vigilantes, that keep the city of MegaTokyo safe from rampage robots known as Boomers. As they fight their way through the growing robot threat, a conspiracy involving mega-corporation Genom begins to arise. Soon, it becomes a race against time, as the Knight Sabers must keep the city safe from both Genom and the growing boomer menace.

Why this show? The show is a great example of the Blade Runner-inspired brand of cyberpunk, as it presents a bleaker picture of the future, and a more realistic depiction of a not-so-distant future. The show comes from a time when production budgets were sky-high, and it shows, with gorgeous animation and excellent art direction. Plus, there’s a gaggle of awesome ’80s rock. 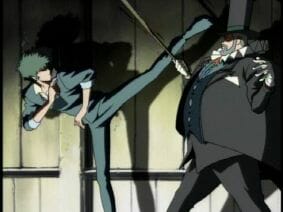 What is it? Bounty hunters Spike Spiegel and Jet Black are two bounty hunters that live on the spaceship Bebop. Together, with crew members Ed and Faye (and the super-intelligent dog Ein), they travel across the galaxy as they live from bounty to bounty. However, even the greatest bounty hunters in the galaxy have trouble keeping away from their own pasts…

Why this? The series is a series of short adventures, tied together with an exceptional Jazz-inspired soundtrack. And, frankly, the show is just a ton of fun to watch. Be it adventures on a space station casino, or run-ins with experimental mushrooms, the Bebop’s adventures rarely disappoint. 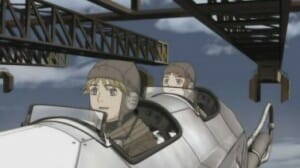 What is it? Claus and Lavie are the pilots of a craft known as a Vanship. they eke out a living as couriers, in the strangely Victorian landscape. They get entangled into a strange mission, though, after they rescue a young girl from a new form of killing machine. The mission: To deliver the girl to the mercenary ship Sylvana. By completing the mission, the two become embroiled in a growing conflict as fighter pilots.

Why this? The show excels in so many places. A well-written plot, gorgeous animation, and fantastic characters come together to form a fantastic overall experience. 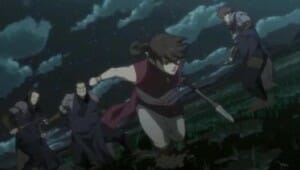 Moribito: Guardian of the Spirit

What is it? Balsa is a spearwoman that travels the land to save lives and atone for a past sin. Through her journeys, Balsa saves a young prince who takes her on as a bodyguard. The prince is going to need her services, since his own father, the emperor, wants him dead.

Why this? The series combines a fantastic story, a compelling cast, and impressive animation to create an excellent final product. The show doesn’t move as quickly as some titles, but to pass it up would be an absolute shame. 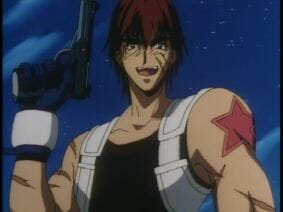 What is it? Gene Starwind and Jim Hawking run a small business on the planet of Sentinel III. After taking a job for the criminal “Hot Ice” Hilda, they find themselves in possession of the Outlaw Star – a highly advanced prototype spacecraft, and its interfacing android Melfina.To fulfill their client’s wishes, Gene, Jim, and Melfina begin their search through the galaxy to find the Galactic Leyline: a location unknown to man, and rumored to hold riches beyond comprehension. The journey won’t be easy, though. Through their travels, Gene and crew will need to deal with cops, space pirates, and even other people hunting for the Leyline.

Why this? It’s not an adventurous show, and definitely contains a number of popular genre cliches. However, the journey itself is particularly clever and fun. 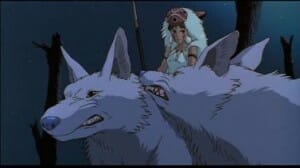 What is it? Ashitaka is afflicted with a deadly curse after fighting Nago, a giant demon boar, to save his village. To find a cure, Ashitaka severs his ties to the village, and travels west, toward the home of the Gods. In the forest, however, he becomes embroiled in a growing war between the Gods, and the human settle of Iron Town, which is led by the enigmatic Lady Eboshi.

Why this? Mononoke is a film that rises above most anime and, heck, even many films in general. Lush art and gorgeous animation meld with a subtle, yet effective plot about man’s eternal struggle against nature. 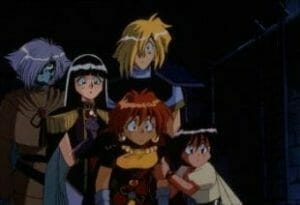 What is it? Lina Inverse is a hot-shot sorceress that is known by many names, from “Bandit Killer” to “Dragon Spooker”. Through her journeys, she crosses paths with wandering swordsman Gourry Gabriev, whose brawn is unmatched, while is brains are, well… his brawn is unmatched! What was to be a quick meeting of convenience quickly swells into a globe-spanning adventure, as old gods, and mysterious priests threaten the world

What is it? The show combines a number of concepts that are familiar to American fans. The Dungeons & Dragons-inspired settings mix with a fantastic cast and a fun, light-hearted plot. 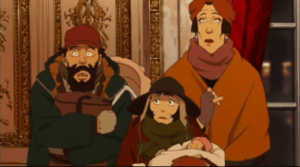 What is it? Three homeless residents of Tokyo – a middle-aged alcoholic, a high school runaway girl, and a former drag queen – come across a baby as they are searching dumpsters for potential Christmas gifts. The drag queen, believing this to be a gift from God, takes the baby into his care, as the three begin searching for the child’s mother. 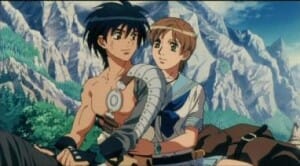 The Vision of Escaflowne

What is it? Hitomi, a high school girl from this world, is transported to the magical land of Gaea, where she meets Van, prince of the kingdom of Fanelia. Unfortunately for Hitomi, she is pulled into a growing conflict with the Zaibach Empire, who seeks to revive the power of Atlantis. As Van and Hitomi travel the strange planet to unite the world against the growing threat, Hitomi discovers a new psychic power, and begins to see the truth behind the mysteries of Van the the war machine Escaflowne.

Why this? The show offers something for everybody. The series walks a fine line between genre lines without falling into a specific category. At the same time the plot is well-written, the characters are fantastic, and the music is simply gorgeous. Even fifteen years after its initial airing, people who started with the show are eager to speak fondly about the show, and newcomers are still discovering the fun.

Previous: Finding A Starting Point
Next: Resources, or Where to Go Next