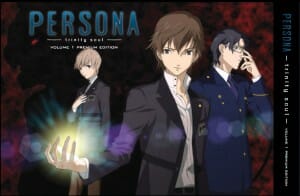 Every day, we wear masks. We hide behind visages and personalities, that we change for every situation. We call these reflections of the soul “personas”. In the face of adversity, fear, and the unknown, we try to hide behind these masks, in hopes that nobody can reach the bitter, hurt person behind it. However, what happens when the burden becomes too much? What happens when the facade begins to consume, rather than protect? Unfortunately, many fail to learn until it’s too late. 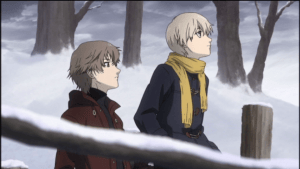 Winter approaches the city of Kisaragi. Snow begins to drift upon the landscape, and the scars of a disaster of ten years ago fade with the white. Two boys make their entry to the city, to find their last family tie. A warm reunion between estranged brothers is shattered by a ten year time gap. The shadows weep with fear, as people shed their masks.Personas, the other selves, rise from the chosen. A mysterious group consumes them, as a mysterious leader seeks the regain what he lost long ago.
The two boys push on. Friendships are made. Uncomfortable truths arise. Losses grow large, and painful. The clock is ticking, as the disaster ten years prior begins to loom again. 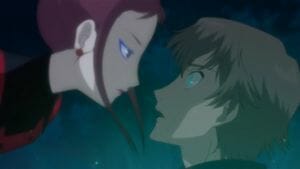 The tale of the two boys, Shin and Jun, is one that is that is difficult to watch, yet worth the effort to do so. The tone is often muted and somber, with hints of a playful side that is quickly stifled. Tensions rise, as the characters’ demons are unearthed, both figuratively and literally. The trials of the cast are portrayed as dire, but not overly angst-ridden. The characters’ pain is evident, but they don’t gripe about it every waking moment of the day. Instead, their issues serve as an undertone, a conveyance for the larger, more urgent plot. Still, the insight into the lives of the casts is somehow enthralling, even in the wake of certain disaster. The show’s climax is far from a happy, cheerful ending that one would like to see from a show where the cast sees so much physical and emotional abuse, but it’s fitting, and complete to an extent that no viewer should be disappointed. 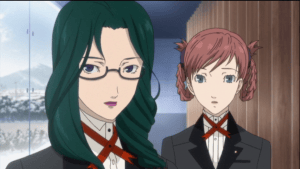 To set the scene, composer Taku Iwasaki created a soundtrack that emphasized the somber, yet urgent tones of the underlying story. Slow, melodic string pieces and somber piano melodies provide much of the background ambience for the show. As the tension builds, so does the music, with powerful operatic chants and full instrumental tunes providing accompaniment to the action on-screen. The opening themes of the show felt right at-home with the rest of the score, and seemed more akin to somethign that the cast would listen to on a radio or headphones. The ending songs were both slow, melancholy pieces that were simply sublime. Both Nana Kitade’s Suicides Love Story and Yumi Kawamura’s Found Me are subdued pieces that carry both the tone and the somber feelings of the show proper. Curiously, among the show’s musical tracks, the only music that truly didn’t fit was recycled from the source material. During certain segments of the show, bits of Burn My Dread, Persona 3’s opening track, are scattered as background music. This piece is so unlike the rest of the score, so foreign to the world, that it stands out as a black mark on the series, and rips the viewer out of the world of the characters. While breaking the fourth wall is nice at times, it simply isn’t appropriate to do in a serious character drama. 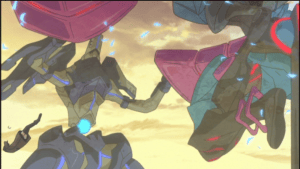 The presentation is rounded out by a strong, effective visual design. Amazing background pieces, from snow-covered forests to desolate beaches and crowded cityscapes provide a fantastic contrast to the cast. The characters are lovingly designed, and manage to stand as unique, memorable figures, despite their ordinary appearances and often-muted wardrobes. The personas are more lovingly crafted, with distinct, yet appealing designs. The action is brought to life with when these titans clash, with gorgeous use of CG that blends well with the aesthetic of the show, and a lack of over-reliance on special effects.
Persona: Trinity Soul offers a glimpse into the world behind the masks that people wear. It is not a show for the faint of heart, but the experience is one worth enduring. The somber tone, and intriate plot are among the strongest to grace a show this year. Those considering the show, be it fans of the Persona games or anime fans in general should absolutely give Trinity Soul a chance. It will exceed all but the highest of expectations.
Persona: Trinity Soul is available in America through NIS America
The series can be purchased at Right Stuf.
Thanks to NIS America for providing a review copy!