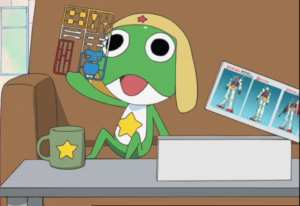 The first convention of the season is over, and it appears that the fun is already beginning. At Katsucon, FUNimation announced that they acquired the rights to the To OVA, with plans to release it this summer. They also revealed that they would be releasing a new season of Sgt. Frog to DVD this summer.

While I’m digging the announcement of To, I have to admit that Sgt. Frog is what really stole my attention. Sgt. Frog is a title that is an unfortunate result of timing, licensing, and market. The series was originally acquired by ADV Films in 2006. The series was heavily pushed by ADV for a while, though it was never released. There was originally a loose February 2007 date floating around, but this was not outright confirmed by ADV. At that year’s Comic-Con, ADV revealed that they were shopping the show to TV networks, though this never came to fruition and ADV folded before a DVD could hit. It wasn’t until after FUNimation picked up the title in ’08 that we’d finally get hints that the show would be released.

The series finally hit western DVD in September 2009, to middling sales. A total of four sets, containing 52 episodes, were released from September, to March 30, 2010. After that, we got silence. There had been some chatter that the series might be dead in the water, in a similar fashion to Detective Conan. With this announcement, fans finally got a chance to breathe easy.

If you haven’t guessed yet, dear reader, I’m a huge fan of Sgt. Frog. I instantly fell in love with the show’s quirky, yet charming cast and the often geeky and silly humor. More than anything, it reminds me of Steven Spielberg’s Pinky and the Brain, on a much larger scale. The constant Gundam cracks, the sci-fi tropes, Kururu… it’s all just an appealing mish-mash of a comedy that works beautifully. I’ll be eagerly awaiting this upcoming release, and encourage those who haven’t seen the show just yet to check out a few streaming episodes, at the very least. This is a title where the appeal is a bit difficult to explain and, thus, seeing is believing. Those that are curious can check out the series on hulu, FUNimation’s video portal, or Anime News Network.