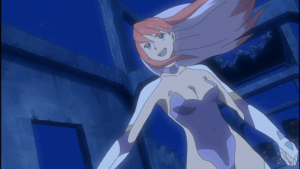 In 1988, Masami Yuki broke into the ranks of anime history when he created Patlabor. Yuki’s distinct visual style, combined with a down-to-earth take on seemingly far-off concepts like giant robots and advanced technology. Before Patlabor, Yuki had a string of titles, from the silly comedy Assemble Insert, to the mecha-comedy Kyukyoku Choujin R. Of his pre-Patlabor works, Birdy the Mighty seemed to have the most potential. The title was an unfinished story that mixed science fiction and crime-fighting action, with light-hearted high school drama. The title, which received a 1996 OVA, was abandoned after one volume. Unfortunately for fans, neither the OVA nor the manga told a complete story, which left many hoping to see more. In 2008, anime fans received a second chance to experience the inter-stellar action with the debut of Birdy the Mighty: Decode – a series that aims to surpass its predecessor in every way possible. 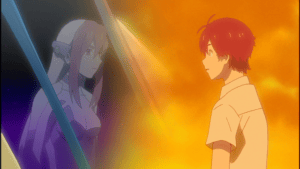 Birdy the Mighty: Decode is a tale of two lives, hopelessly bound together. Tsutomu Senkawa is a geeky haikyo (urban ruin) freak that seems to have little idea about what’s going on in the world at large. Birdy, on the other hand, is a hot-shot intergalactic police officer that tracks and captures many of the universe’s mot dangerous criminals. Well, she would be, if not for her current assignment. Birdy is currently on Earth tracking two suspects that are smuggling particularly dangerous cargo. To keep from being outed as she searches, she assumes the identity of Shion Arita: greenhorn idol and all-round airhead. An up-and-coming pop icon and a ruin-crawling geek wouldn’t normally cross paths. However, fate made an unfortunate exception, when Tsutomu and Birdy both wound up on space criminal Geega’s turf. Tsutomu and his childhood friend Natsumi sneak into the abandoned ruins of some building, which (surprise!) is also one of Geega’s strongholds. By coincidence, this is also the night that Birdy chose to infiltrate the facility. The excursion ends horribly for both parties, as Birdy loses the perp, and Tsutomu ends on the floor in a gooey red paste. To make up for the error, the higher-ups in Birdy’s organization bond Tsutomu and Birdy together, so as to create one body with two consciousnesses. In this condition, the two lives are changed forever, as the two are quickly thrown into a situation that could endanger not just themselves, but the entire planet. 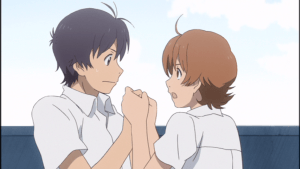 The plot setup sounds convoluted, and it certainly seems so for the first episode or two. However, it quickly becomes clear that the Birdy/Tsutomu dynamic is basically a way to keep content in neat segments. Basically, if Tsutomu is on screen, there’s an 80-20 chance that the tone will favor slower, more character-centric scenes. One can assume the opposite in the case of Birdy. It’s a simple mechanic, but it works well enough and does a decent job of being unobtrusive. On the note of being unobtrusive, it seems like the writers went out of their way to make the show’s plot simple to a fault. From early in the series, every plot twist and surprise can be predicted with zero effort. Still, it’s hard to deny that Decode is fun. The characters are written well, and the rare humor tends to work more often than it doesn’t. The plot moves quickly, and rarely dwells on plot points. And, unlike the original OVA, this series actually has a concrete ending. If there were any major complaints, it would be that there are numerous dangling threads by the end of the final episode. Questions of the identities and motives of Kristella Revi, the strange marionette girl, and even Gomez are left with no real resolution, and little overall development. The series also teases viewers with glimpses of fantastic worlds, but never goes further than just that. The experience is as frustrating as it is intriguing. 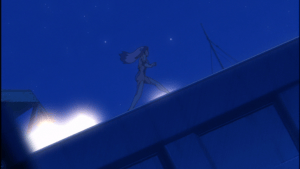 On the visual front, the series manages to excel on multiple levels. Character designs are clean and attractive, with excellent use of color. The alien designs in particular are surprisingly varied and creative, be it the frog-like Geega or the insectoid Megius. The cinematography is particularly strong, with fantastic uses of camera and color to convey the series. In particular, camera-work seems to have been given a top priority through the series. From off-level, angled camera shots in action scenes, to a lovingly-copied, shot-for-shot remake of Spider-Man‘s signature scene. CG work is subtle, and often used for special effects, such as sparks kicked up by Birdy’s boots, or to provide a sense of weight to the big hits.

The series is tied together by a solid aural presentation. Miyu Irino and Saeko Chiba deliver outstanding performances as Tsutomu and Birdy, respectively, and are backed up by a solid cast of supporting actors. The soundtrack is peppered with tunes that range from brassy character themes to poppy background filler, and quiet piano melodies. The series opener, Sora by Hearts Grow and closer, Let’s Go Together by Afromania are fun rock-inspired pieces that really sell the light-hearted adventure aspects of the show.

After a decade of waiting and many false hopes, Birdy the Mighty: Decode is the update that many fans were waiting for. The show has the same spunk and charm of the original, and serves as an impressive attempt to bring the charm of the ’90s to audiences of today. Despite its few shortcomings, Decode is a solid title that’s well worth a watch.

Birdy the Mighty: Decode is currently available through FUNimation.
The series can be purchased at Right Stuf.
Thanks to FUNimation for providing a review copy! 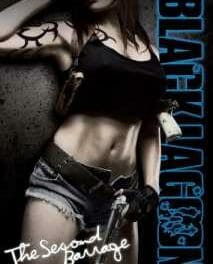