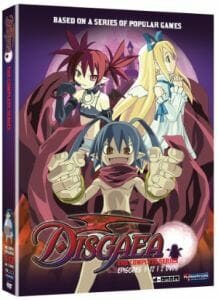 The content of this piece was written during a viewing of the first episode of Disgaea on March 25, 2011. Edits have been made for spelling and grammar, but the rest is completely untouched, and un-edited from its original format.
If anyone has ever wondered what a train-wreck in motion looks like, take a gander at Disgaea. Anybody looking for a quality comedy though, look elsewhere.

7:39 PM: Good evening everyone, and welcome to another showblog!

7:39 PM: Tonight’s feature is one that may be interest to the gamers out there.

7:39 PM: For those who haven’t been exposed, Disgaea is a mediocre-at-best strategy game that encouraged game breaking and grinding over strategy.

7:40 PM: The title did have some popularity though, thanks to stronger-than-average writing, and spawned three sequels, as well as numerous side games

7:40 PM: Still, the anime IS based on a video game, so I expect this to be, like the game it’s based on: mediocre at best.

7:42 PM: And we open to a sweeping shot of the heavens, going down to hell… so we got THAT part established early. :P

7:42 PM: And enter the blonde angel-in-training, before kicking to the opening credits.

7:43 PM: Catchy opening theme – so it has something going for it so far

7:44 PM: Music sounds like straight-up recycles from the PS2 game.

7:44 PM: Anyway… we’ve got someone going into a giant structure of sorts.

7:45 PM: Apparently she can – found a casket… and now she’s going to go Sailor Moon on someone’s ass! 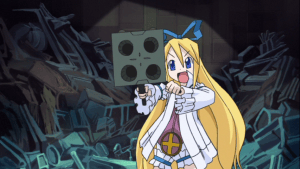 7:46 PM: Not even the whole “blow up the damn casket with a missile launcher” bit

7:47 PM: “I think this is a garbage dump :D” your powers of observation are KEEN, Flonne 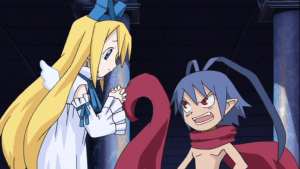 7:49 PM: She’s off to kill Laharl’s dad… but she’s against it, herself – CHARACTER BUILDING! Or something

7:51 PM: Exposition time! Laharl was buried and left for dead, Flonne dug him up. The Overlord proper died 2 years prior.

7:52 PM: “The overlord met a tragic end when he choked on a dumpling of the damned! :3” I guess fail runs in the family 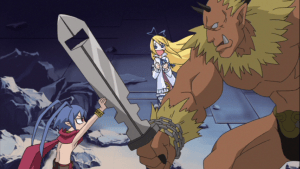 7:55 PM: And they’re on the ropes and gonna die, thus ending this show early! Or it’s just a false moment of tension.

7:55 PM: Mid-show analysis: god, this sucks. It sucks worse than a broken strategy game that doesn’t rely on strategy! Wait…

7:56 PM: Laharl and Flonne got their butts saved by a stray rocket.

7:56 PM: And inside is human superheroes.

7:57 PM: …How did a human get into Hell? O_o Nevermind… the plot’s already fucking broken beyond repair 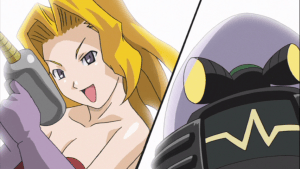 7:58 PM: And Laharl’s being hit on by the girl with a massive rack

8:00 PM: Who now thinks he was trying to kill Flonne… and we get another face full of boobs T_T wtf, Japan

8:02 PM: And Flonne? She’s lecturing someone that leveled a giant stone structure.

8:02 PM: Oh boy… Flonne lost her pendant. .. which keeps her alive in the netherworld

8:03 PM: And Flonne doesn’t have any money… this is so predictable it hurts

8:05 PM: “I might rot away soon but I’ll use every ounce of strength to assassinate you! T_T” Oh boy, please do 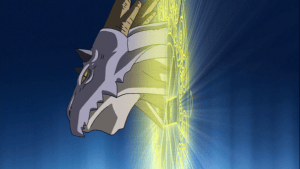 8:06 PM: Flonne’s going Pokemon on his ass… GIANT DRAGON, I CHOOSE YOU!

8:06 PM: And now we have our third protaganist entering: Etna

8:07 PM: The humor falls flat, the characters are vapid, two-dimensional pests, and everything is just painfully predictabl.

8:08 PM: From this short taste, I’d say you’re best off leaving this alone. It’s a below-average anime, based on an average-at-best game.

8:08 PM: There are far funnier comedies, and far more satisfying adventures than this.

8:09 PM: Anyway, thanks for joining me tonight. Have a nice weekend!

Disgaea is distributed in America by FUNimation.
The series can be purchased at Right Stuf.
Thanks to FUNimation for providing a review copy!