Recently, FUNimation started airing television commercials for their Blu-Ray release of Dragon Ball Z. The spot has been hitting Cartoon Network, among other channels, at prime time slots. In particular, the ad has aired in the coveted 5:00 to 6:00 time slot, as well as other scattered blocks through the day. The commercial itself is basically a shorter version of the following trailer:

In a post-TV-industrial world, the commercial’s impact is growing dimmer by the day. People are finding ways around the pesky advertisements, and denying the advertisers their precious attention. After all, they are the new kings of the market, and they don’t like being told what the marketer desires. Customers want to be told stories, which they can tell themselves to help justify that $30, $40, even $50 that they are spending. These individuals want stories that are simple, effective, and most important, authentic. Stories that follow these rules will become stories that people want to tell their friends, families, and acquaintances.

With this in mind, let’s briefly deconstruct the story told by the above trailer (which was shortened into the advertisement), from perspective of somebody on the outside looking in:

The first 17 episodes of animated show Dragon Ball Z is now available on Blu-Ray. The show was remastered from the original Japanese film, and features numerous special features. Dragon Ball Z is an action show about giant, burly men who scream a lot, beat the crap out of each other, shoot lasers, and sometimes fight werewolf… things.

Anime fans would find a lot in the commercial to be interested in. The commercial focuses places the product, the product’s features, rather, at the forefront. The side-by-side comparisons, emphasis on the special features, and repeated hammering of “first time in HD!” are talking points that are relevant to the established audience.

The wider audience would find more importance with the following story points:

These elements are important because they tell the story of just what the show is. They lay the groundwork for the stories that the viewer will tell himself or herself when somebody mentions the show. They’re what the customer will remember when considering the show for retail, or looking it up online. These points will also determine whether the viewer will even bother to look it up, to check out videos on YouTube, Hulu, or FUNimation.com, or if they will ignore the show entirely.

In thirty seconds, FUNimation managed to tell a story that allows the viewer to tell his own story at the same time. It gave a short, simple, authentic telling of what was in the set, and what products were being offered. The stories told by the customer will inevitably decide whether the show itself succeeds or fails in the market, but these careful nudges show a clear understanding of the market, and how a good story can work even in a fading format. 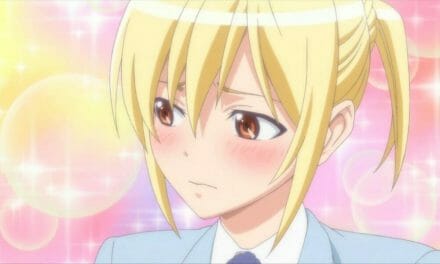