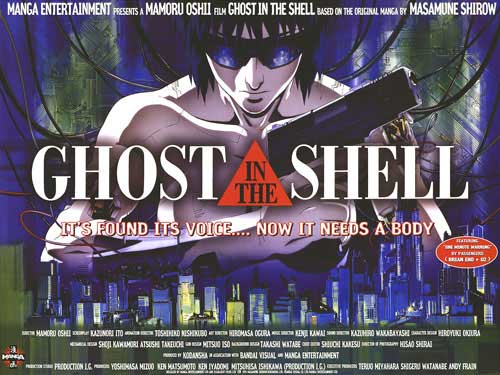 Ghost in the Shell is a science-fiction film directed by Mamoru Oshii. The film is based on a manga by Masamune Shirow, and was animated by Production I.G.

The film is set in the year 2029, which is a time of high science, cybernetics, and robotics. Humanity and technology have grown together, and boundaries between the real world and the digital continue to break down. However, with the rise of humanity comes a new threat, in the form of brain hacking: skilled hackers can exploit the very cybernetics that humans implant themselves to gain control of the host.

Major Motoko Kusanagi is the lead operator of Section 9, a band of cybernetically-enhanced officers that are tasked with crimes that are beyond the abilities of the average police. Their current target is the Puppet Master: a mysterious hacker that has been targeting high-profile victims. As the pursuit intensifies and Section 9 closes in on their target, difficult questions begin to surface, like “What does it mean to really be “human”? These answer to these queries may hold they key to bringing the Puppet Master to justice, but they may not be what Kusanagi and crew want to hear.

Ghost in the Shell was the first anime film to receive a near-simultaneous release in Japan, the United Kingdom, and the United States, with all three regions receiving the film within four months of the original Japan debut. The film topped the United States’s Billboard video sales charts, becoming the first titles to receive major mainstream sales success.

In short, Ghost in the Shell created a generation of anime fans.

In western media, the film directly influenced the style of a number of sci-fi directors, from James Cameron, to the Wachowski Brothers. Film producer Joel Silver reveale that the Wachowskis showed him the film to demonstrate the style they desired for their Matrix trilogy.

On The Tonight Show, Conan O’Brien and Andy Richter did an on-location shot at Bang Zoom! Entertainment. At the studio, they dubbed a short segment of the film (video below).