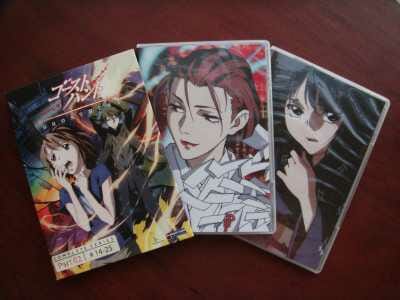 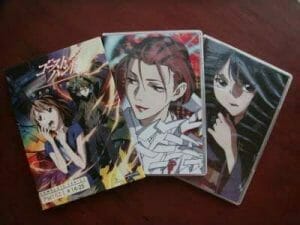 The typical anime release: nondescript and similar to a fault to the competition's product.

As we take the first steps into the Blue Ocean, it becomes important to decide a basic space in which the study must take place. In the anime industry, it is easy to see that there are two basic categories that businesses operate. Each of these can be broken into pair of separate sub-categories:

For the purposes of our study, we will focus strictly on the DVD market. Manga’s book market was disqualified due to the outside influences that recently occurred, namely Borders’s bankruptcy. eBooks and digital sales were disqualified due to a lack of reliable sales data on-hand. In addition, DVD (and video) have a far longer history in the western market, which will allow for stronger case studies and more detailed analyses of long-term data.

At a glance, many can argue that the anime DVD market is a blood-red ocean. Companies have fought each other to the death over several decades, with numerous fixtures in the industry facing their last gasp as customers fled the market. Central Park Media, ADV Films, and numerous other companies no longer exist, due to the cycles of direct competiton that saw cannibalization and homogenization across the board.

The current market space has a clear leader, in the form of FUNimation. They have the clear advantage in a number of categories which include capital, product catalog, and retailer pull. Their releses dominate the brick and mortar stores, as well as the top-ten lists of online retailers like Amazon. All other players, from Sentai to Viz, are playing the same game and trying to one-up each other to capture the title of market king.

As these remaining players continue to fight, the ocean will only continue to grow redder, as companies bite the bullet to make any possible headway into this increasingly hostile territory. Customers will leave, and the current players will continue to trend upmarket, as they try to maintain the niches they’ve cultivated, and cater to the whims of the vocal minorities that exist today.

No business will explicitly state this, however. We hear it all the time: “We’re not in direct competition”, “Things are going great”, and so on. And, frankly, we should expect no less. Companies thrive on an image of confidence and grace. So, like the Titanic’s band playing as the ship goes down, a company will continue to argue that they’re fine. ADV did this, Geneon did this, and certainly any other player in a similar situation will try to proclaim the same.

In the current industry, its quickly becoming apparent that the industry needs to seek another blue ocean. Returns are diminishing, and the need to reach out to a new customer is getting more urgent. There is room for change, and there are literally dozens of potential directions an enterprising company can take to side-step the competition and make the current competition irrelevant. Much like Cirque du Soleil or [yellow tail] wine, it’s entirely possible to find a new market that will revitalize a market on the downturn. However, just how the solution will arise has yes to be seen at the moment.