Earlier this week, FUNimation began posting links to an online survey. At a glance, this is little more than the standard “Christmas List” that customers have become accustomed to. The first thing that viewers are treated to is the following question:

Which of these shows would you purchase on DVD or Blu-Ray? The releases would be presented similarly to how FUNimation currently releases new 13 – 26 episode series

I won’t deny that these two questions are useful. They provide valuable insight into the customer-base’s buying habits and preferences. The real fun begins after these two base inquiries, though. The remaining questions consist of the following:

In Blue Ocean strategy, these six questions provide information that is incredibly valuable to constructing a new strategy canvas. The input from these entries can be pegged as a way to learn just what the market finds important. With this information at the ready, the company can see where its values align with customers, and where they need to make changes in their own market outlook. These particular queries can be broken down into the five Ws: “Who, What, Where, When, & Why,” with each being important to the formulation of a sound market analysis.

The questions of age and gender constitute the matter of Who. Who are the customers? How old is the average customer? Are there more men or women buying? These questions allow for the company to better tailor specific marketing strategies, from ad formats to promotional pitches. Where ads go, and how they’re presented can be derived from simple demographic queries. The country of residence question makes up the Where. While most entries will be from the United States and Canada, a significant number of entries from other countries could force the company re-evaluate its international strategy.

The matters of What and rest, in the questions of which release the user most values. Finding the particular titles would be useless on its own, as there are, literally, thousands of potential factors that can create value in a product. Some will cite the package as the key factor, others will cite the price, or the content of the show itself. The question of why, instead, creates a more usable set of data. Users, when asked what they value in a product, will often group around common terms and patterns. So, by combining the two questions, the company can gain insight into the types of shows that their customers find valuable, as well as a quantifiable way of verifying why they find such products so appealing.

The final question, “Which series or movie would you use to introduce a friend to anime,” constitutes the How. This can best be translated to “how do you introduce new users to anime?” Or, more specifically, “which titles grow the market?” By observing what grows the market, FUNimation can find common traits between them, and determine which of these has the most potential appeal to new customers. The findings can be used in the consideration of new titles, in order to determine which will have the biggest appeal to new customers and first-tier refusing non-customers, in addition to giving the ability to determine what has a better potential of falling flat in the larger market.

While the questions are simple, FUNimation’s new survey provides a surprisingly large amount of usable data. With the right approach, the company could feasibly re-define its strategy canvas, and discover oceans of potential customers that they hadn’t even considered. Just how FUNimation will handle the data, though, is anybody’s guess at this point.

The Blue Ocean Strategy book actually defines a similar case study with a currency conversion agency, in which the company at hand took to the customers to gain insight on how to re-define its strategy. The re-tooling allowed the agency to rocket past all competition in the marketplace. 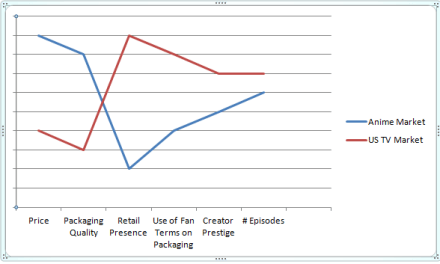