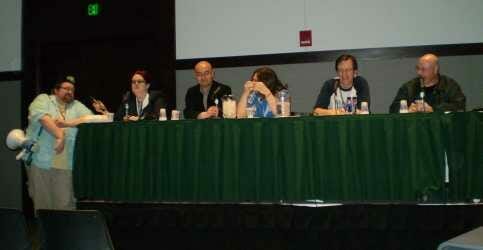 Ten years of AB leadership, all telling their best stories.

Ten Years of Anime Boston was a rare opportunity to see things from the other side of the convention. Current convention chair and vice-chair Andrea Finnin and Victor Lee joined previous convention chairs Adam Ferraro, Patrick Delahanty, and Keith Kisovet to share anecdotes and experiences that they’ve collected over the years.

The event was served primarily as a question-and-answer session. Queries ranged from “How did you determine how many would attend the first AB,” and “How did Tom Wayland get involved,” to more serious fare such as “What was your favorite moment” and “What was your favorite AMV.” Each question seemed to have an answer that involved some story, some interesting roundabout way that proved that truth is often stranger than fiction. Events and experiences that somehow worked out, no matter how unlikely they seemed, be it a heroic lad in an elevator or an AMV that inspired viewers to wave their lit cell phones in unison.

They told tale of improvised Masquerades, nervous breakdowns, line woes, and AMVs, and revisited long-forgotten events like the infamous “2003 Trophy Incident.” Tales of an impulsive and diminutive singer, crazy guest favors, and strange sightings in the Green Room were told to great amusement, both among the panelists and the audience. Staff security member Shamus was pulled into the discussion at points to lend his own experience on drunken attendees crazy confiscated items, and the like. The lighter tales seemed to temper recollections of more serious events that arose, like the first year’s near shut-down and vandalism in the 2008 convention lines.

Through the conversation, it became clear that the people who run the event, who put in countless hour year after year, truly love the event and what it stands for. They strive to deliver the very best experience for the tens of thousands that filter in through the doors every single year. They cherish the fellowship they share, as well as the opportunity to give the same to countless others.

Though the event ran longer than expected, it seemed that each member had something more to say. Another story, another comment, another memory. While this was meant to be an panel to look back at ten successful years, the opportunity to hear more observations from the inside looking out would be truly valuable to those who have been to every Anime Boston, or even those attending for the first time.