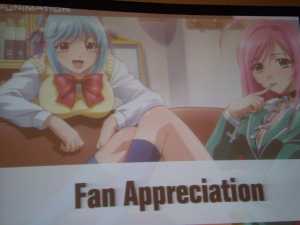 This year, the FUNimation panel could be defined by two simple words: “Fan appreciation.” Basically, in addition to the normal flow of release date announcements and new title reveals, the FUNimation crew unveiled what was, without a doubt, the most unusual and unsettling ways of creating brand attachment in a public forum.

Fan Appreciation segments were divided into two parts. The first was “live stories,” in which the reps chose members from the audience to rise to the podium and tell their stories about how FUNimation changed their lives. The second, mail-in entries involved either Adam or Justin reading stories from anecdotes from fans, which were previously submitted via FUNimation’s web site. In both cases, the story’s owner would receive a prize of sorts, be it a DVD or some merchandise.

If this were done properly, it would have been a fantastic move on a business level. Attaching the company’s brand name to positive experiences and good times would be a brilliant way of creating brand attachment in the marketplace. People would be able to recall the company name, and associate it with these experiences, thus creating a greater desire to purchase from (and therefore fund) FUNimation in particular going forward. It’s a technique that’s known as “Emotional Brand Attachment” in marketing circles. In English, this means that people generally make relationships with corporate brands similarly to the way they form relationships with other people. And with these relationships come the same factors of trust, loyalty, and commitment that would stem from human interactions. Some companies managed to do this well in the past: Apple computers is a prime example of Emotional Brand Attachment gone right.

Unfortunately, what went on at the front of Hall A this year was far from an Apple experience. Through each Fan Appreciation segment, it was clear that the reps were trying too hard, as they read stories that sounded like terrible LiveJournal posts and tried to keep the crowd engaged somehow.

While these segments were somewhat offset by revelations of the company’s shiny new titles and information on the upcoming Mass Effect and Dragon Age “anime” features. the sheer surreal nature of the Fan Appreciation moments make them stand out as surreal highlights of an otherwise run-of-the-mill industry event.

Note: This isn’t a commentary on FUNimation reps Justin Rojas and Adam Sheehan – they’re fantastic people that genuinely love what they do, and will go above and beyond to make people happy. This is a commentary on the panel proper. 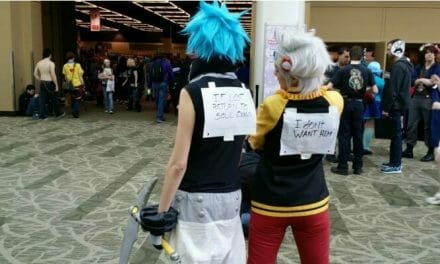 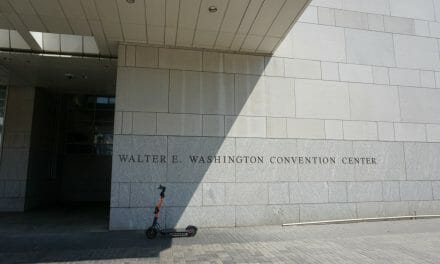