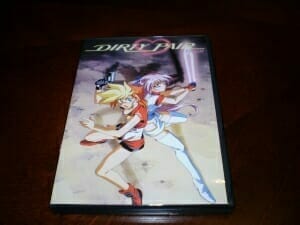 It’s always interesting to see when a title returns to the marketplace in a license rescue or a re-release. It’s something that many of us rarely consider since, well.. the two products that hit are fundamentally the same. The show doesn’t change, and many don’t really have a need to revisit the property after the initial review is finished.

If we look just below the surface, we can see a number of subtle differences between releases. Sometimes, it’s as simple as a logo change and a new piece of key art on the box. Other times, it’s a complete overhaul, with a gaggle of new content and a shiny new master, as we saw with Nozomi’s release of Revolutionary Girl Utena.

A few weeks ago, I’ve received the privilege of a review screener for Nozomi’s release of Dirty Pair Flash. Last week, I found the original ADV Films releases of the series amongst a number of discs that were thought to have been lost during the move. Rather than let things fall by the wayside, I’d instead like to use the opportunity to provide a direct comparison between the two companies’ releases.

The first thing that should grab the observer’s attention is the logo. ADV’s releases have a sharp, angular logo with a stark yellow hue. Nozomi’s release, on the other hand, uses a variant of the logo the company placed on their Dirty Pair TV and movie collections. The angled text and softer curves, combined with the fluorescent pink heart look more like the throwback to the 1980s origin of the franchise.If you notice, the first volume of ADV’s release shares the same key art as that of the Nozomi release, albeit with a different backdrop.

The back covers reveal few surprises. Aside from some wording in the descriptions, we see a basic presentation for a product of this nature. Nozomi’s product does contain more actual show content, with an array of screens from across the series.

The interiors is where the real difference begins. Since Nozomi’s product is a bargain release, it eschews the niceties of items like inserts, which we see depicted in the ADV releases.

Next, I’d like to take a look at the menu structure between the two releases. Since ADV and Nozomi have a consistent look and feel across their discs, I’ll be making comparisons against only the first series. Further dissection would be redundant.

The first thing that greets viewers to the ADV release is an animated menu with the six episodes presented front-and-center. Clicking through to each segment presents a somewhat consistent visual style, with a piece of key art super-imposed over a green background, as menu objects are presented with red text on a black background. Scene select menus are presented with stills of key moments serving as specific chapter buttons.

The Nozomi release, on the other hand, retains the retro-grid look, with white text on a dark background. Rather than focus on key art like ADV, they instead placed images of popular spacecraft, like the Lovely Angel, against the space background to provide atmosphere. Chapter menus are presented as vertical lists, with each episode featuring three episode stills.

The ADV releases contain a small amount of extra content, which is mostly presented in the form of original VHS trailers, character profiles, and a production art gallery. In addition, ADV’s first volume contains a hidden “easter egg” item in the form of a deconstruction of the first trailer for Dirty Pair Flash 2. Nozomi, on the other hand, is more stark as they presented two trailers for other Nozomi titles.

Now that we’ve discussed the window dressing, I’d like to talk about the product’s visual presentation. We’ll begin by looking at the title screens of each release:

If you notice, the ADV release has an English overlay over each of its titles. Credits are presented in English. Nozomi, on the other hand, retains the original Japanese logos and credits.

If we look at the overall quality of each release, we’ll see a stark difference in quality. In general, we see lower saturation in the Nozomi release. However, we also see a greater overall definition, with more stronger lines, less color bleeding, and a better definition of hues. In the ADV releases, we saw artifacts and a general graininess in blacks and darker colors, which was largely fixed in Nozomi’s releases.

Overall, it’s a wash. Whoever has the stronger product is a matter of preference. Those who desire the extra material will argue that ADV had the better product, since they capture the production art and the original VHS trailers. Those concerned with video quality will say that Nozomi offers the better product hands-down, due to the cleaner and brighter overall quality, and the fact that Nozomi’s release doesn’t crush the dark colors.

State of the Herald (Lite): A Change Of Focus