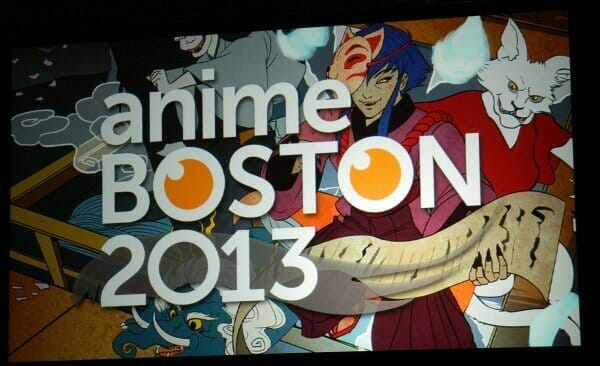 Over the years, the Chibi Project: Live! panel has become a staple of mine. The concept itself is simple: panelists Patrick Delahanty and Jekka Cormier dedicate the hour to destroying toys in the most twisted ways possible. At the same time, they deliver cheeky, often silly commentary to get the crowd laughing. There are few surprises, the opportunity to indulge one’s darker side (and have a good laugh while doing so) is always well worth the annual attendance.

This year’s panel opened with a brief reel highlighting the duo’s greatest destructions, from Grilled Menchi (from Excel Saga), to the literal Burning Gundam. After the video ended, a guest came to the front, and donated a new toy for the two to maim: an Edward Cullen (from Twilight) doll. As one would expect, this prompted a major reaction from the attending fans. After the group calmed down, Delahanty and Cormier explained how the Chibi Project came to be.

The duo’s descent into destruction began in 1999, when Delahanty received a small PVC Chibi Moon doll from a friend. His friend, who abhors the character said to do whatever with the toy. So, taking inspiration from The Twinkie Project, a website that found creative ways to destroy Hostess Twinkies for the entertainment of the masses, Delahanty formed the Chibi Project. After fifteen tests, which ranged from placing the toy onto train tracks,to taking a soldering iron to it, the toy was essentially destroyed. With no Chibi Moon to kill, they set their sights on other projects, like dropping an EVA-01 figure 220 feet,or taking a belt sander to a Pikachu doll. This eventually even led to donations from within the anime industry, such as the previously-mentioned Menchi plush. Over the years, the group began to formualte a theory – very scientific, mind you – that the difficulty of a toy’s destruction is directly proportional to how evil it is. The group began a podcast dedicated to furthering their “research” in 2006, but it became more of a back-burner project for Delahanty when he was hired by TWiT.

Before they would unveil the night’s victims, the pair shared a bit of footage from an upcoming podcast episode. Specifically, the two were gifted with thermite recently, which they were going to use to destroy a love pillow they received at Anime Boston 2012. Since Delahanty was in California, Cormier took the situation into her own hands, and made a pillar of Super Mario Bros. tins, the pillow, and a Night Elf Ranger figure (from World of Warcraft, with hopes of having the thermite burn through the stack.

The thermite wouldn’t catch, which led to Cormier giving up and using fire as her engine of destruction. The thermite remains un-burned, and there are plans to use it for an upcoming podcast. 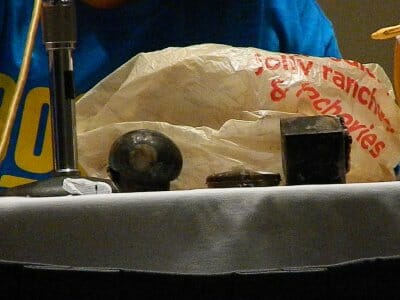 Even their failed attempts lead to destruction. Progress!

After the pre-recorded fun, the two unveiled the evening’s victims: 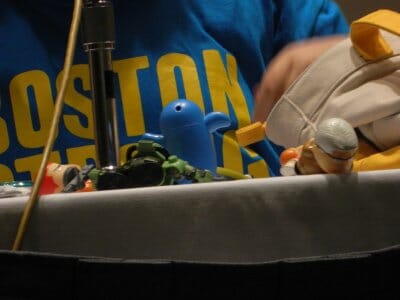 Delahanty then unveiled his instrument of destruction for the evening: a Slap Chop! The TV chopper that is advertised as being able to chop just about anything. Surely we’d be seeing plastic fly tonight, right? 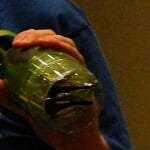 For once, the Zaku didn’t get destroyed. Click for full image.

The first victim was the Beyblade top. The chopper did little more than create a few scuffs in the paint. Deeming it a failure, they tossed the top into the audience, to some other hopeful engine of destruction. The second victim on the lineup was the Zaku, the disposable cannon fodder of the Gundam universe. The two figured that a more solid surface was needed, which led Delahanty to begin using the floor as leverage. Rather than destroy the toy, though, the Zaku proved its one moment of resilience, as it bent the blades of the Slap Chop.

The atmosphere dimmed a bit, as the room grew dead silent. Many figured that this would be the end of the evening’s fun. The despair didn’t last long, though, as the two prepared a backup. Delahanty pulled out a soldering iron which, for those who aren’t aware, heats to roughly 450 degrees celsius (842 degrees Fahrenheit). Once it was warmed up and ready, the duo’s first victim was Bloo, better known as “the one toy Jekka didn’t want to ruin.” Murphy’s law struck again, as the toy bent the soldering iron, though it was still usable. Delahanty carved a grotesque smile into the figure, and placed numerous holes through it. He then set his attention on the Slam Dunk figurines, which he poked holes through the eyes. one of these continued to smolder after Delahanty gave it the 850-degree makeover, which required submersion in water for a rapid cooling. Cormier, not to be outdone, took a swig of the PVC-laced conconction. The results, to say the least, were not pretty.

After the toys were thoroughly ruined, the two shared ideas for a few upcoming destructions, and solicited ideas from the audience. They closed off the panel with highlights from “Bootlegs vs. Steamroller,” in which Delahanty, Cormier, and voice actor Greg Ayres ran over a pile of unlicensed merchandise with a steamroller. 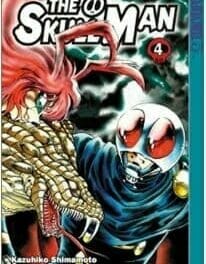