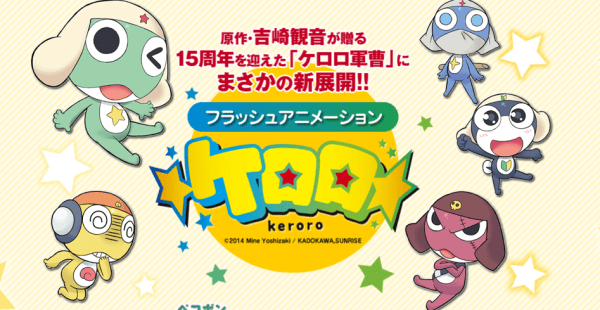 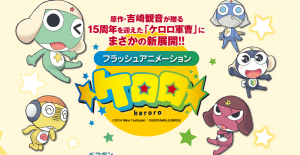 Yesterday, Anime News Network reported that Sgt. Frog would receive a new anime adaptation. The new title, which will be titled Keroro, will be a series animated in Flash by Sunrise. Haruki Kasugamori ((DD Hokuto no Ken, Ketsu-Inu) will direct the series, while animation studio Gathering will assist with the show’s animation. The original cast will return to repise their roles, from Kumiko Watanabe as Keroro, to Takehito Koyasu as Kururu. The show is scheduled to première on Animax in spring 2014.

Sgt. Frog is one of those shows that, for a time, seemed like a fact of life on Japanese TV. The series had an impressive run, spanning seven years, 358 episodes, and nearly half a dozen films. It’s a title that was popular enough to spawn a magazine (Keroro Land), several video games, and many toys that include several Gundam figures (Gunpla). The characters wormed their way into pop culture, to the point that they began appearing in anime titles like Lucky Star and video games like Tales of Vesperia and Monster Hunter Tri G.

Like Detective Conan, Doraemon, and Sazae-san, the show had become a fixture in the anime lineup. So, when the show finally went off the air in 2011, it seemed as if a void had opened in the anime landscape. Sunrise’s announcement of the franchise’s revival can be seen as somewhat of a return to normalcy.

How Keroro will be handled, though, remains to be seen. While Sunrise is still handling the animation duties (thus ensuring the various Gundam jokes and parodies that the franchise is known for remain intact), the specific announcement that the show is a “Flash anime” should bring some pause. This isn’t necessarily a bad thing, mind you. Flash has been used to great success in the west now, as it’s brought award-winning titles like Metalocalypse and My Little Pony: Friendship Is Magic to life. In Japan, though, the term “Flash” does have bring a negative connotation. It’s an implication that the show offered is a low-budget affair that isn’t on the level of a studio’s normal output. Until the show airs, we have no clue as to how the show will be handled, so it’s wise to reserve judgment on this end.

Personally, I’m thrilled to see that the franchise is making its return to Japanese TV. While there are still numerous unknowns with the new series, I do hope that Sunrise and Gathering will be able to produce a series that can stand up to the legacy of its predecessor.