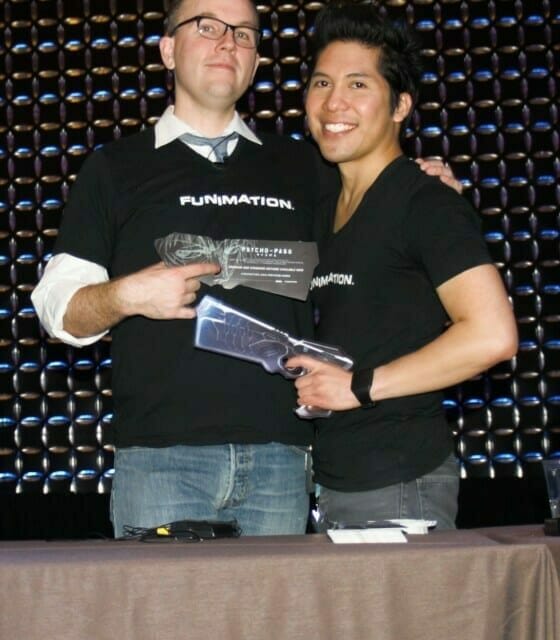 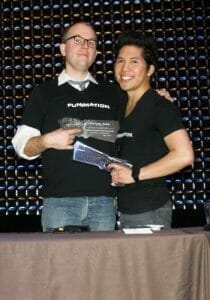 This year’s Anime Boston was a huge one for FUNimation. On top of the big Attack on Titan premiere, which ended the speculation of exactly who would play Eren Jaeger in the show’s upcoming dub, the company would host no fewer than four panels.

The FUNimation Online panel was hosted by Justin Rojas and Adam Sheehan, who brought a light-hearted atmosphere and a healthy sense of humor. The panel began with the usual sizzle reel which, in this case, was a trailer for FUNimation.com.

After the trailer, the two dove straight into the topic of social media, and how FUNimation’s users in general act within its sphere. Apparently, the company’s primary users love them some Facebook, Tumblr, Twitter, and the like. And cats. But, really, who doesn’t like cats?

Anyway! After the social talk, the topic shifted to the company’s online services, starting with Video On Demand. FUNimation is looking to fill every channel possible, from Netflix, to Hulu, to even Wal-Mart’s Vudu service.

Afterwards, the discussion quickly moved on to The FUNimation Show, which is a series of online shorts, that may or may not necessarily be related to anime. This includes things like meetings with folks at NASA, or an appearance with YouTube’s Man At Arms. Basically, it’s their place to do all of the things that aren’t anime episodes or clips. The company created a season’s worth of content in 2013, though they are focusing more on “quickies” for the current year. Rojas noted that the company was filming for the show this weekend.

The two gave a quick mention of Adult Swim’s Toonami block, noting that it is “doing well”, and that it would be a lasting fixture for the foreseeable future. FUNimation’s biggest title on the block is currently Space Dandy. The two used this to bring up the fact that Space Dandy is directed and animated by a different set of people in each episode, a la The Animatrix. This allows for the variety of visual and storytelling styles that viewers praise about the show.

The talk about Space Dandy then shifted to a larger discussion of FUNimation. They led off by mentioning that views of the simulcasts are factored into decisions to pursuing DVD and Blu-Ray rights. This quickly gave way to a promotion of the company’s Elite Subscription, which hosts “over 9,000” episodes and films. They highlighted the service’s availability on devices like the iPad, Roku, and Android markets. This was punctuated by a trailer, which ended with the tagline: “Anime. Everywhere.”

The two continued, with the focus shifting to FUNimation’s online shop. The store allows for FUNimation to sell exclusive items, like the recently announced Attack on Titan limited edition. The company is also able to run sales on services, like the “Gen’s Birthday Sale”, to celebrate FUNimation founder Gen Fukunaga’s birthday (March 22, 2014). The two discussed new additions to the shop, like Dragon Ball Season 2’s Blu-Ray, or Psycho Pass. This was punctuated with a commercial for the service, followed by a trio of clips from Space Dandy.

Sheehan and Rojas continued, discussing more recent offerings like their simulcast of Noragami and Robotics Notes. Trailers for Robotics Notes and Fairy Tail were shown before they revealed the company’s April online releases:

A brief clip from the live-action Yamato flick was shown, which highlighted the first use of the ship’s Wave Motion Gun. Afterwards, Rojas and Sheehan went over Date A Live, which Rojas described as being “like a dating sim!” A clip was shown, before the two opened the panel to questions and answers. Before the floor was opened, though, they made sure to note of FUNimation’s current online promotion: visitors to http://www.funimation.com/evsspecial will receive a 30-day trial to the company’s elite service, as opposed to the standard two weeks.

While the Industry Panel proper was the main event, the FUNimation Online panel served as a decent look at the company’s online strategy. There was no big title reveal, nor were there any shocking news items to speak of. However, the panel itself proved to be an entertaining experience. Rojas and Sheehan kept the mood light with a playful sense of humor and a willingness to make jabs at the titles they were talking up. The various trailers and clips were well-placed, and served as a strong buffer for drier bits of content. 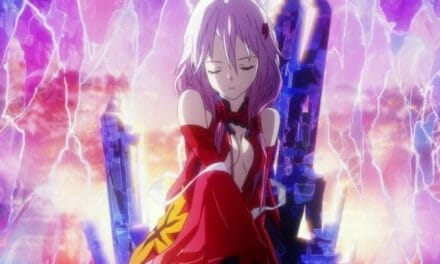