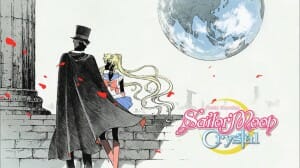 In a lot of ways, Sailor Moon Crystal feels like it was ripped out of the early ’90s.

Oh yes, I went there.

This isn’t necessarily a bad thing, mind you. The early 1990s was a truly unique period in the history of anime. It was a period of transition, where shows proudly wore their influences of landmarks like Macross and Urusei Yatsura. Eva hadn’t yet dropped into the world, and creators were still finding ways to find a style that, while familiar, was uniquely theirs.

It was this period that saw the genesis of numerous beloved properties, including The Slayers1, Samurai Pizza Cats, and, of course, the original Sailor Moon.

The original Sailor Moon was a landmark, which re-defined the magical girl genre and created a sea of copycats. Legions of fans were created around the world, which continue to adore the show to this day.

Unfortunately, Sailor Moon first hit the airwaves in 1991, 23 years ago. This is long enough that most of the anime’s original fans have grown up and created fans of their own. In addition, the original anime adaptation saw a number of stylistic and narrative liberties at the hands of director Kunihiko Ikuhara, which would split it from the original manga.

Sailor Moon Crystal, in this light, was pitched to be a reboot of the historic franchise. It was to be a new anime, that stuck to the manga’s roots, and told a tale that was more in line with Takeuchi’s original work. It would feature a new look, new animation that would be closer to the original designs, and everything would be approved by the creator herself!

At this early stage, though, long-time fans will likely feel like they’ve seen everything before. The familiar plot points are all in place:

So yeah… It’s the first episode of Sailor Moon, more or less.

But again, that’s not necessarily a bad thing. And, to be honest, it’s not something I’ll be knocking the show for. This is a reboot, which means that familiarity will often come part and parcel with the show itself. 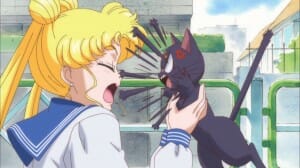 What I found particularly fascinating, to be honest, was the show’s delivery. The show is paced like something you’d see in a show from the early ’90s, with a deft blending of goofy, slapstick comedy with the dramatic scenes and well-choreographed action. These comedic segments deliver a sense of playfulness and whimsy to the series, and really help to build up the character of Usagi as a well-meaning klutz.

I have to reiterate just how much love the humor in this so far. For some reason, Usagi falling down the stairs on her butt, only to receive a nonchalant “Are you okay?” from her mom just cracks me up. I could say the same for a segment later in the episode, in which Sailor Moon is running from hordes of mind-controlled humans as she screams like a banshee (among many other scenes). The staff really did a fantastic job of capturing that silliness that seemed to run through so many big anime titles of the early ’90s, right down to the timing of the gags.

On a visual level, the series received a major upgrade. The character designs have been given that modern-day sheen, with a thinner and more delicate overall appearance. The angles are sharper, the faces are a bit less round, and the overall body shape is much thinner than those of the original incarnation. The result, though, is that the characters themselves are far more expressive, and able to work a scene without entering that “super-deformed” mode that was common in its predecessor. The backgrounds are to die for, with an exquisite watercolor style that gives an almost dreamlike tone to several scenes.

All is not perfect, though. The show’s delicious visuals are sadly marred by a clumsy use of 3D CGI effects. These bits feel incredibly out-of-place, and do little more than to pull the viewer out of the experience.

Overall, though, Sailor Moon Crystal is shaping up to be a wonderful series that will please fans and newcomers alike. The familiar content is given new life by clever writing and a fantastic sense of humor, while the visual style is a truly welcome update to the classic look. So long as the series can keep the pace it’s set in this first episode, I have little doubt that the end result will be something truly special.

1: While the Slayers anime didn’t appear until 1995, the novels were being actively serialized as of 1989