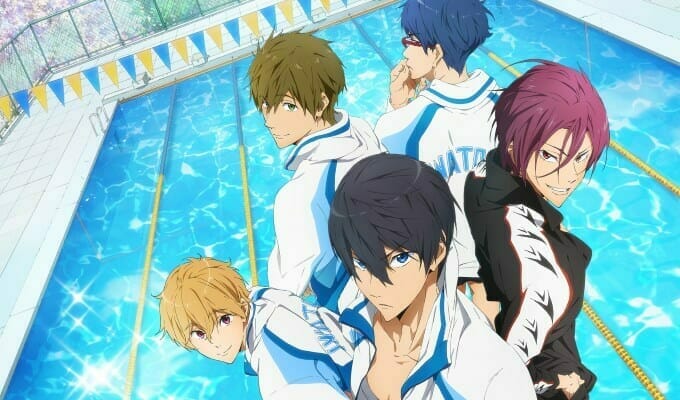 Last night, Discotek announced that they will release 14 new titles:

In regards to Free! Iwatobi Swim Club, which streamed on Crunchyroll in 2013, Discotek will offer the series with English subtitles on DVD. The company mentioned a possible dub, but offered “no details yet on the possible dubbed version or who will release it yet.”

Robot Carnival was originally released to theaters in 1991 by Streamline Pictures. This was followed by a dubbed VHS run and bilingual laserdisc release. Discotek’s release will include both the English dubbed and subtitled versions of the film.

Arpeggio of Blue Steel will be released in subtitled format, though no mention of whether this would be a DVD or Blu-Ray release were mentioned.

Night on the Galactic Railroad, which adapts Kenji Miyazawa’s novel of the same name, was originally released in North America by Central Park Media. Discotek aims to release the film on DVD this year in both dubbed and subtitled formats. A Blu-Ray release will follow at an unspecified later date.

Hi-sCool! SeHa Girls will be released in a complete collection, though Discotek did not reveal a format for the title’s release. Likewise, the company did not state whether this would hit DVD or Blu-Ray.

Strike the Blood will be released in a complete collection with English subtitles. Discotek didn’t mention if this would hit Blu-Ray, or if it would be a DVD-only release.

Galilei Donna wll be released in a complete collection with English subtitles. Discotek didn’t mention if this would hit Blu-Ray, or if it would be a DVD-only release.

Like Strike the Blood and Galilei Donna, Recently, My Sister Is Unusual will be a subtitled release. The show will be released in a complete collection, though no word on whether this would hit Blu-Ray or DVD was given.

Earl and Fairy and Shining Tears X Wind will also be released in English-subtitled format.

Night Warriors was originally released in North America by Central Park Media. The 3-episode OVA will be released as a complete collection with both English subtitles and a dub.

Street Fighter II: The Animated Movie is a 1994 adaptation of the video game of the same name. The film was originally released in edited form in North America by SMV Enterprises. The film was later released uncut by Manga Entertainment. Discotek will offer the movie on DVD and Blu-Ray, though they didn’t mention which edition of the film would be released.

The Street Fighter II TV series is a kid-friendly adaptation of the series that was produced by USA Network from 1995 through 1997.

Night on the Galactic Railroad

Recently, My Sister Is Unusual