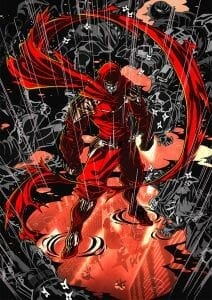 Earlier today, FUNimation announced that they acquired the domestic streaming and home video rights to Ninja Slayer From Animation. The company plans to simulcast the series, though a launch date and time have yet to be determined.

FUNimation’s official synopsis for the series is as follows:

In addition, FUNimation uploaded the show’s official teaser to its YouTube channel, which you can check out below:

Ninja Slayer was first revealed to be in production in June 2014. The series, which is being animated by Trigger, will be directed by Kill la Kill Co-director Akira Amemiya. Hiroshi Sato is writing the show’s screenplay, while music will be composed by the team of Shinichi Osawa and Kenji Fujisawa.

Character designs are being provided by the team of Hiroyuki Imaishi, Yusuke Yoshigaki, saitom, Inato Serere, and Shinjiro.

In February, the full Japanese cast was revealed, placing Toshiyuki Morikawa as the titular Ninja Slayer, and Sho Hayami as the villainous Dark Ninja. The full listing is below: