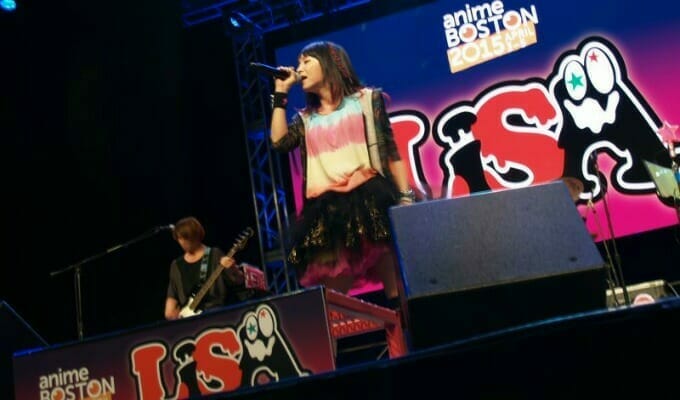 This year’s Anime Boston featured pop princess LiSA as an opening act. While the name may not necessarily be familiar to people, her body of work is. Since her début in 2010, LiSA has provided music for numerous fan-favorite anime series, including Sword Art Online, The Irregular At Magic High School, and Angel Beats!

With this in mind, it’s easy to see why the line for her concert seemed endless as it stretched through the halls of the Hynes. By the time the pre-show began, the room was packed to capacity. Both the floor and the balcony were standing room only, with the murmur of fans growing as the moments ticked ever-closer.

The room erupted in cheers when LiSA took to the stage, and she responded in turn. The band kicked to life, and the show was on.

LiSa was a ball of energy through the performance, as she delivered a mix of familiar favorites. She bounded across the stage and led calls and responses with the audience, all while not skipping a beat. Songs flowed from one to the next without pause, and everything seemed to be on the table. Popular anime themes like Crossing Field (Sword Art Online) and Oath Sign (Fate/Zero) were punctuated by popular singles like Bright Flight and Wild Candy.

Even LiSA’s slower songs, like Shirushi had an unmistakable warmth and liveliness to them, as people in the audience began to sway and sing along.

There were numerous highlights of the evening, from the surprise performance of Nisekoi: opening Rally Go Round, to the truly inspired performance of Fate/Zero opening Oath Sign. That said, though, two moments will likely stand out in the minds of those who made it to the concert.

The first came near the end of the set. The room had grown silent, and LiSA took her place at the center of the stage. Suddenly, the familiar guitar chords began to play, and the room exploded in excited ovation. The song was Ichiban no Takaramono, the iconic insert song from Angel Beats!. Fans were singing to the melody, gathering close, and just reveling in the raw emotion of the performance. As the song drew near to a close, LiSA grew silent, and the room followed suit. One could hear a pin drop in the moments before she kicked into the final chorus of the song.

The second came shortly after LiSA and her band had finished their initial set. The lights were dim, and the fans were pumped. Chants of “Encore, encore!” echoed through the auditorium for several minutes. Suddenly, LiSA made her way back to the stage, to raucous cheers from the crowd. She asked the attendees to gather to the middle for a photo, which most gleefully obliged. Moments later, when everyone returned to their seats, the singer cried out. “Are you ready?! Are you ready?! Are you ready?!“, each call-out receiving an ever-growing cheer in response. 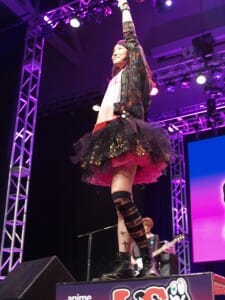 It was then that LiSA began her final show of the night, Crow Song from Angel Beats!. And the crowd just erupted. On the floor, fans were getting up, rocking out, pumping their fists and chanting. And LiSA, well, she was in her element. She paced the stage like she owned it, taking pauses to dance along to the interludes between her lines, and reach down to touch the hands of her fans, who were beginning to crowd the stage.

In Angel Beats!, Crow Song was first played in the show’s première. All girl band Girls Dead Monster takes to the stage in the cafeteria, putting on an impromptu show to distract the student body as the Not Dead Yet Battlefront pull off a caper to lift meal tickets from the generally unresponsive student body. And, really, it works. The students in the cafeteria flock to the stage, as a giant fan sends their meal tickets soaring out the upper windows, only to rain down from above.

LiSA’s performance of the song had such a pull on the audience, such an energy that one could almost see that rain of meal tickets, fluttering down from above. It was a truly incredible way to close an already memorable evening.

LiSA raised the bar for concerts at Anime Boston. Her tireless energy and impressive performances ensured that any act that attends will have a difficult legacy to follow. 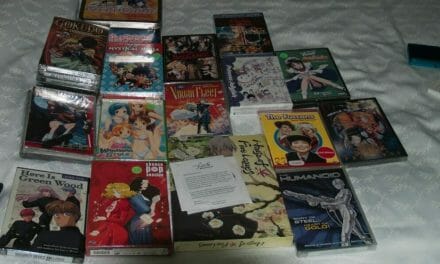 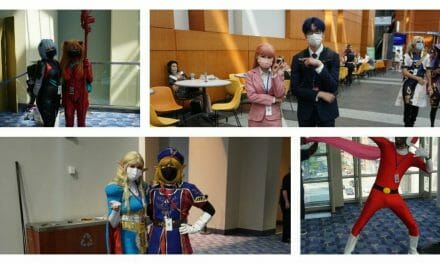 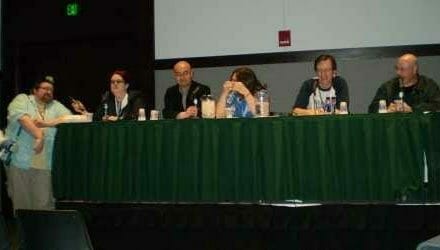