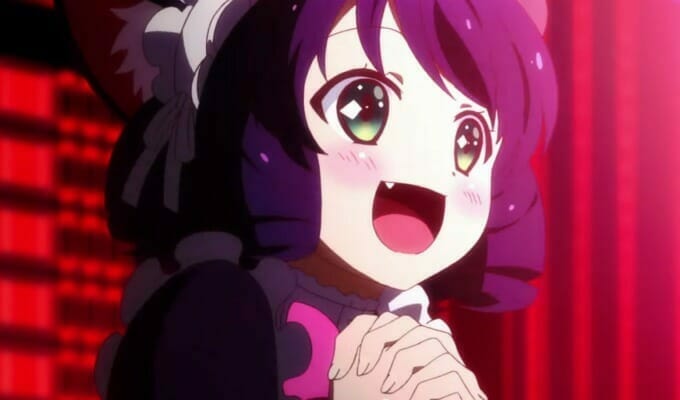 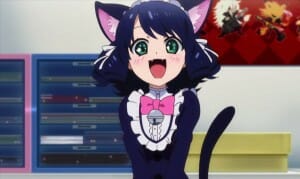 Sometimes a show comes along that has the perfect blend of nonsense, craziness and campiness. These are the shows that are so far out of the ordinary that they just work. From the first episode, it looks like Show By Rock!! may be one of these rare gems.

Cyan Hijirikawa is a typical first year high school student. She wants to join the music club, but is just too darn shy to actually go through with it. Her luck changes one night, though, when she plays a rhythm game on her phone. Cyan wins the “Strawberry Guitar,” which transports her to the glowing metropolis of Midi City, where music is king. Upon her arrival Cyan, sees the band Trichronika playing to a large crowd. While watching the group of furry performers play, Cyan realizes that she, herself, has transformed into a gothic lolita cat girl.

During the concert, Trichronika is attacked by a “dark monster” who attempts to corrupt the group, and turn them into dark monsters. After Cyan saves the day with her “Strawberry Guitar,” she is approached by Maple Arisugawa, CEO of Banded Rocking Records, and asked to join his label. The good news doesn’t stop there, though. Plasmagica bassist Retoree asks Cyan to join the band, to which Cyan gladly agrees. Of course, she’s not only doing this to help the band rise to the top. Plasmagica’s success is also the key to Cyan’s returning home! 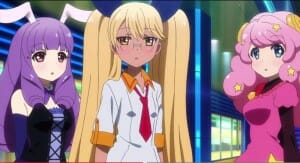 Show By Rock!! is based on a rhythm game by Saniro, With this in mind, it’s clear that the show is never going to be considered high art.

But that doesn’t matter.

The titles campiness, combined the sheer nonsense of the whole situation makes it hard to feel bad when watching. Why do the musicians turn into chibi furries when they are singing? Who cares! Why is Maple a talking egg with a mustache? It doesn’t matter! It’s all part of the nonsense.
Bones has earned a reputation for visual quality in their years of operation. Even with a show like Show By Rock!!, they fail to disappoint. When the scene changes to Midi City, the colors pop with neon tones and characters start to take on distinctive animal traits. Possibly the biggest complaint about the show’s visual style stems from the 3D CGI used during concert and battle scenes. While the CGI is clean, with fluid animation, the characters tend to have a plastic “uncanny valley” look. 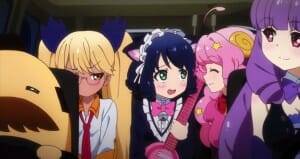 At this point, I am not exactly sure as to which direction this show is going to take. Any attempts at a serious angle will ruin what the show is trying to do. On the other hand, it is also possible for the craziness of the premise to get old making the show a one trick pony. Regardless of how it goes from here, the first episode of Show By Rock!! is a ride on the crazy train that those looking for a campy show are going to want to board.

Show by Rock!! is currently streaming on Funimation.com