Tags: danmachi, impressions, is it wrong to try to pick up girls in a dungeon? 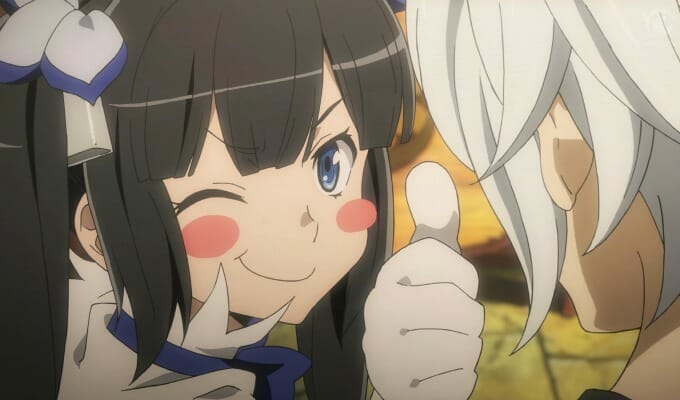 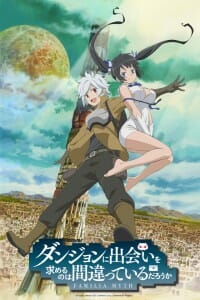 Is It Wrong to Try to Pick Up Girls in a Dungeon? is a fantasy comedy set in a world of swords and sorcery. In this world, the gods descended to live amongst the mortals. Of course, such an opportunity comes at a price. The deities who decided to leave the comforts of their domain must forfeit their powers, and challenge the hardships of life head-on.

The only gift that they hold on to is the ability to bestow a magical gift upon their followers. Those who accept the blessing of a deity gain the strength to destroy the forces of evil that threaten the land. In exchange, those with the gift join the divine being’s familia. They must venture into the vast dungeons that stretch below the city. Within the dungeon’s bowels, adventurers battle demonic forces in the name of their god to earn both reputation and coin for the sake of their familia.

Bell Cranel is a greenhorn adventurer, who only gained his blessing a few weeks before. He’s the first and only follower of the goddess Hestia, whose name is all but unknown to even many deities.

One day, Bell finds himself in the depths of the dungeon, outclassed and staring down the muzzle of a rampaging Minotaur. Fighting the beast head-on would be suicide, so Bell does what any smart person would do: he runs, tail between his legs, as far as he can. He’s quickly backed into a corner, where death seems all but certain.

Before he’s pounded into a red paste, Bell is saved by a mysterious blonde beauty. He’s immediately smitten by the lady. Rather than do the sensible thing, though, Bell darts straight out of the dungeon, soaked in the blood of the very Minotaur that was eager to kill him moments before.

The mysterious girl, Aiz Wallenstein, is found to be part of the Loki familia. Her skill with a blade is unmatched, and her kill count stretches into the thousands.

In short, she’s totally out of his league.

Still, Bell feels that he is destined to be with this girl until the end of his days. Unfortunately for him, though, it seems that there’s at least one girl who has eyes for the plucky adventurer, for better or worse.

The first two episodes of Is It Wrong to Try to Pick Up Girls in a Dungeon? are all about building the show’s universe. The show pulls viewers into the universe with a narrated introduction that fades straight into the heat of battle, which is handled brilliantly. The tension of the first encounter is nothing short of breath-taking, and Bell’s salvation at the hands of Aiz is hilariously anti-climactic.

The aftermath, which saw Bell making a mad dash through the city, blood caking to his body like his stupid love-struck grin was simply delightful.

I couldn’t help but adore how Is It Wrong to Try to Pick Up Girls in a Dungeon? successfully built an entire society of divine entities. This world, which is separate from the realm of man, has its own customs and traditions that allow for truly unique bonds to form between various deities. It sets up a layer of intrigue, with numerous rumblings of something far greater to come.

The human world is similarly vibrant, with characters like the tough-talking Mama Mia and the professional-yet-friendly Eina. They’re genuinely interesting, and tease the viewer with hints of a world that extends far beyond the limits of the screen.

In contrast, Bell just feels simple-minded. His personality is a binary toggle, with his settings being “get stronger for Aiz” and “serve Hestia for great justice.” There’s no real middle ground, despite numerous attempts to build the character up further. The series throws characters at Bell, like Syr the tavern girl, but they’re mostly just a distraction. These moments give the illusion of depth, but Bell himself doesn’t grow much on his own.

Basically, he’s a husk. He lacks a complex personality, which allows viewers to use the character as an avatar.

Similarly, Hestia brings about conflicting feelings, as her character is woefully inconsistent. When she’s around Bell, Hestia is fawning, flirty fetish fodder. She’s needy, clingy, and just about every line oozes with sexual innuendo. Her motivations are as opaque as a pane of glass, and it really grows tiresome by the time the first episode midpoint rolls around.

That’s not the say there isn’t potential in the character, though. In the second episode, Monsterphilia, Hestia and Bell part ways. The pint-sized goddess attends a gathering of deities. As soon as Bell is out of the picture, Hestia’s character takes an immediate turn for the better. Suddenly, Hestia’s personality changes from the needy schoolgirl to an actual person, driven by her own needs and desires.

These scenes paint a picture of a girl who’s in over her head. Hestia’s not in the best graces with the divine, and utterly lacking in the means to survive. Still, she knows how to swallow her pride and make amends to those who matter most. She’s still childish and silly, of course. The oddball fight with Loki is proof enough of this. Beneath that goofiness, though, lay someone who understands that there’s more to life than fanciful romance.

On a technical level, Is It Wrong to Try to Pick Up Girls in a Dungeon? is sure to win a number of fans. The show’s gorgeous backgrounds give the world a real “lived-in feel, and the setting was a refreshing return to a simpler time. Numerous smaller details, like fading signs and crumbling walls give each scene its own unique sense of identity.

At this point, Is It Wrong to Try to Pick Up Girls in a Dungeon? is a series with potential. While there are very real issues with the two leading cast members, it appears that efforts are being made to fix things before they become irreparable. For now, though, it’s a series worth watching, with a rich world and a number of intriguing individuals that begs to be explored further.

Is It Wrong to Try to Pick Up Girls in a Dungeon? is currently streaming on Crunchyroll. 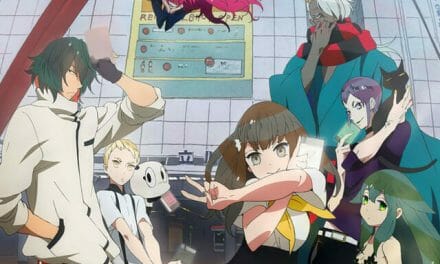