Welcome, one and all, to another installment of AniWeekly. It’s been a busy week packed with news about school idols, vampire hunters, master thieves, and so much more!

In addition, though, it’s a week of celebration, where our friends at Kenji Studio passed their KickStarter funding goals for Coluboccoro. A few days remain in the drive, but you can get the gist of what the project’s all about in our KickColle profile!

With the shameless self-promotion out of the way, let’s get to the good stuff!

Happy Birthday, Maki! On Sunday, fans celebrated the birthday of μ’s crimson-haired songstress, Maki Nishikino. To do so, fans of all stripes brought their A game, be in fan art, cosplay, or even baked goods! 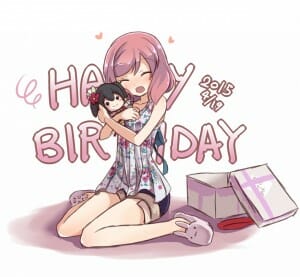 Lupin the Third! Earlier this week, the staff of the 2015 Lupin III anime series revealed that the show would make its Japanese début in the fall. Yuji Ohno, the composer for the first two Lupin III shows, will return to score the show’s music.

ScarJo-st in the Shell: production begins in 2016. In a recent comment to Collider, Scarlett Johansson revealed that the North American adapatation of Masamune Shirow’s Ghost in the Shell will begin filming in early 2016.

“We wanted to adapt Parasyte. In a TokyoFM podcast, Studio Ghibli’s Toshio Suzuki revealed that the studio once tried to adapt Hitoshi Iwaaki’s Parasyte manga, though they ran into rights issues before the project could go live.

The classroom assassinations will continue, Koro-sensei! During recent presentation, the crew for the Assassination Classroom live-action film revealed that a new film and a new anime season are in the works.

Wonderful Rush! The official Love Live! website announced that Love Live! The School Idol Movie will get a global theatrical run. The film, which opens on June 13 in Japan, will open in theaters across the globe, starting in August.

This Week’s AniWeekly Sponsored By

The economics of wall scrolls. Have you ever wondered why wall scrolls are a thing, or how they became such a large part of the fan culture? Lauren from Otaku Journalist goes to the source, talking with members of industry and retail, as she discusses the origins and economics of the anime wall scroll.

Training day! Otaku Review published the latest entry of its “Otaku In Training” series, which offers the perspectives of a new fan as they watch various fan-favorite works.

This month, Jessica takes on My Neighbor Totoro, the delightful masterpiece from Studio Ghibli.

The end of an Impactful summer The folks at Manga Therapy wax nostalgic on the ending of the long-running Neon Genesis Evangelion manga in a thought-provoking essay.

Hangin’ With Mr. Uchiyama. Behind the Nihon had a chance for a rare one-on-one interview with Kouki Uchiyama, a voice actor whose credits include Guilty Crown, Amagi Brilliant Park, and Soul Eater.

Dark Side of the Anime. Seventh Style dives into the dangers of the 2-D world, with a short piece that discusses the darker sides of the harem anime genre.

There’s a gravestone with Daisuke Jigen’s name on it! In the United States, TMS began streaming Lupin the Third: Daisuke Jigen’s Gravestone in both dubbed and subtitled formats. You can give the film a watch below! 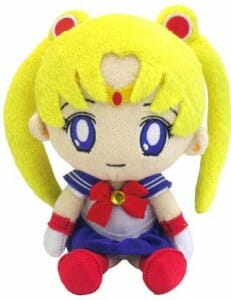 Where was I? Oh, right! This week’s featured goodie is a Sailor Moon plush toy. The doll itself sits at just under 8 inches, and is posed in a sitting position.

The details on the piece, like the gold brooch and the crescent-moon earrings, will ensure that this version of Sailor Moon looks good while she melts hearts in the name of the moon!