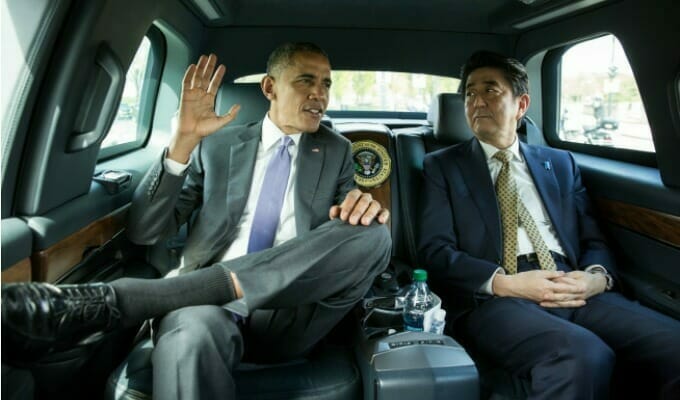 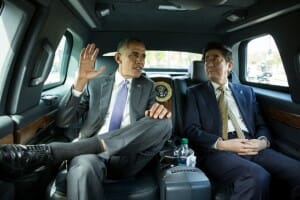 Photo Courtesy of The White House

Earlier today, President Obama welcomed Japanese Prime Minister at the White House. And, as with any major delegation’s arrival, the Prime Minister’s arrival was met with a lively welcoming ceremony.

Abe, speaking through an interpreter, stated that “our bilateral relationship is more robust than ever,” one that’s “addressing regional and global challenges while developing our bilateral ties with the United States in a consistent manner.”

Abe’s visit to America is his eighth since Obama took office in 2009. President Obama noted that it’s a chance for himself and first lady Michelle Obama to pay back the hospitality that they’ve enjoyed during their own trips to Japan.

Obama noted that “today is also a chance for Americans, especially our young people, to say thank you for all the things we love from Japan. Like karate and karaoke, manga and anime. And, of course, emojis.”

The President noted that, “in Kyoto, Michelle had the honor of playing taiko drums. In Tokyo, I played soccer with Asimo the robot.”

Abe is visiting the United States to put the finishing touches on their section of a major trade agreement between the United States and a dozen nations in the Pacific Rim. At the moment, potential hurdles to the agreement include American tariffs on Japanese pickup trucks, and a number of barriers to the import of US-made farming products.

Today’s welcoming festivities will end with a state dinner at the White House. Famed chef Masaharu Morimoto will help to prepare a meal, which features an American preparation of Japanese Wagyu beef. After dinner, the cast members of musical film Jersey Boys will entertain Prime Minister Abe and roughly 300 guests.

Sources: Politico, USA Today (Thanks to L.B. Bryant from Otaku Review for the tip!)