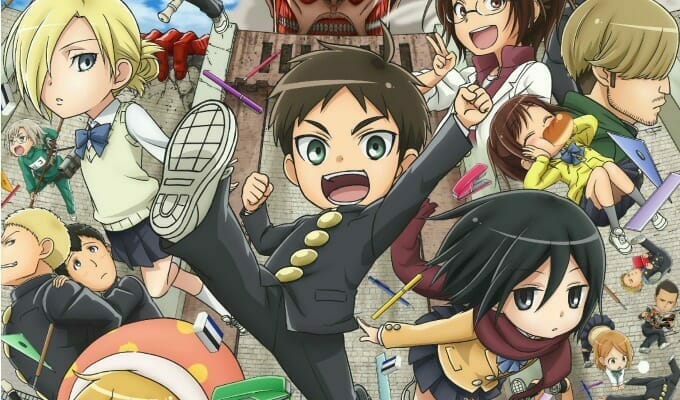 The fall season is here, which means it’s time for announcements! 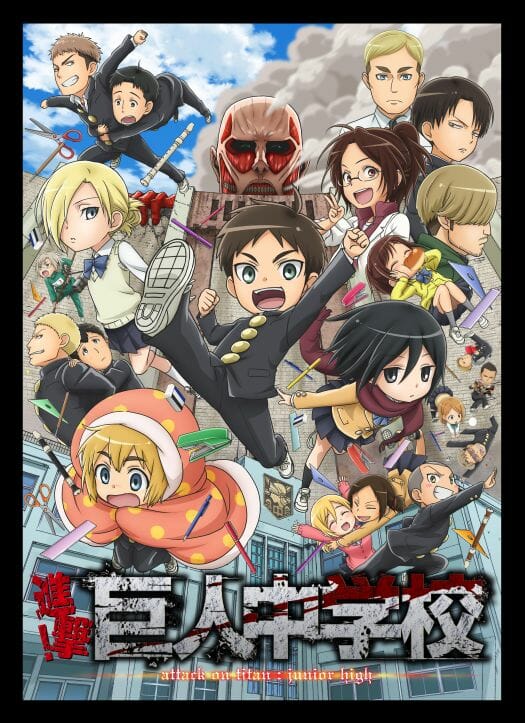 Attack on Titan: Junior High is a comedy series based on Saki Nakagawa’s manga of the same name. The show re-imagines the universe of Attack on Titan by placing the cast into a modern-day school setting, known only as “Titan High.”

The distributor released an English-subtitled teaser to promote the title: 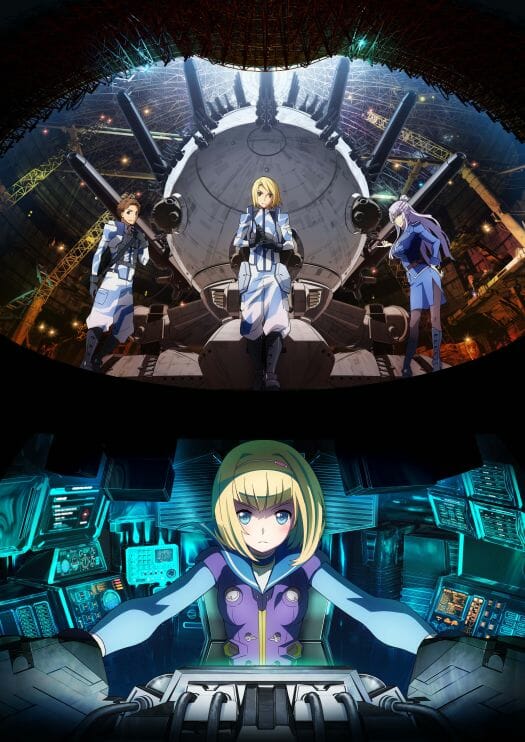 Heavy Object is a sci-fi series, based on Kazuma Kamachi’s light novels of the same name. The series is being directed by Takashi Watanabe (Aria the Scarlet Ammo) at J.C. Staff. Atsuko Watanabe (Unbreakable Machine-Doll) is providing character designs, while Hiroyuki Yoshino handles series composition. The team of Keiji Inai and Maiko Iuchi is working on music.

In the future, warfare has been revolutionized by the invention of mechanical weapons called “Objects.” These Objects are overwhelmingly powerful, rendering traditional weapons like guns, tanks and fighter jets completely useless. Qwenthur is an un-athletic, but smart soldier who aims to work as an Object mechanic. Stationed at an Alaskan Object base, he meets Milinda, a stoic but beautiful Elite Soldier who pilots her own Object. As they learn to support each other in battle, Qwenthur begins to uncover the grim secret behind the Heavy Objects.

The first episode of Heavy Object kicked off earlier today.

Valkyrie Drive: Mermaid is an action series that’s part of a multimedia franchise by Marvelous. The show is being directed by Hiraku Kaneko (Maken-Ki! Battling Venus 2) at studio ARMS. Hiraku Kaneko is pulling double duty on the project as a character designer, while Yousuke Kuroda takes charge of series composition.

After adorable “mermaid” Mamori is transferred to one of five artificial islands, she’s cornered, attacked and eventually saved by another beautiful transfer named Mirei. Unfortunately, even after the girl intervenes, Mamori’s attackers refuse to let up. Just when they think all hope is lost, Mirei and Mamori share a passionate kiss that turns the little “mermaid” into a powerful sword in this new show from series composer Yousuke Kuroda (High School of the Dead, Mobile Suit Gundam 00) and ARMS studio (Ikki Tousen, Queen’s Blade, Elfen Leid). 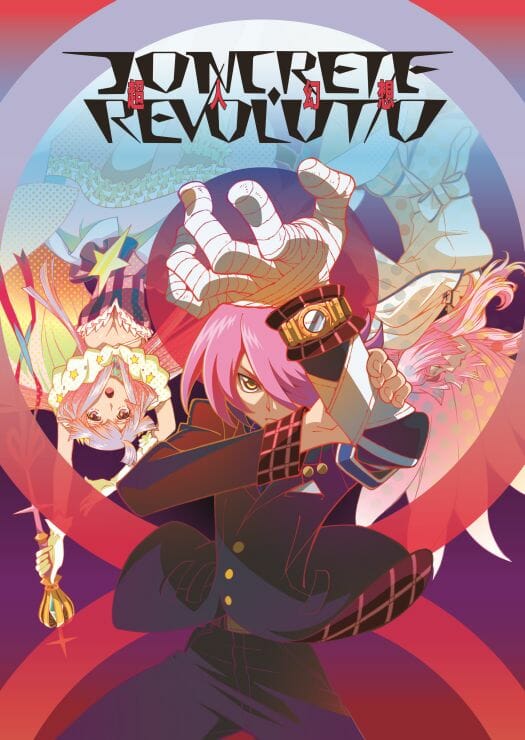 Concrete Revolutio is an original project by studio Bones. Seiji Mizushima (Fullmetal Alchemist, Mobile Suit Gundam 00) is helming the series, with Yoshiyuki Ito on character designs. The team of Kazuki Nakashima, Masaki Tsuji, and Shou Aikawa is working on the project’s scripts.

In addition to the anime series, a manga adaptation by Nylon is being released in parallel with the show.

What if superhumans were real? Even better, what if every fabled superhuman existed at the same time, in the same place? Titans from outer space, life forms from a mystical world, phantoms and goblins from ancient times, cyborgs created by scientists, relics that rose out of the ruins of ancient civilizations. In another Japan, it’s not just a question of “what if”—it’s a reality. Some of the superhumans choose to keep their identities a secret, while others bask in their superhuman fame. Jiro Hitoyoshi, member of the Superhuman Bureau, keeps track of their doings. From the creative force behind Fullmetal Alchemist, including director Seiji Mizushima (Fullmetal Alchemist and Mobile Suit Gundam 00) and writer Shou Aikawa (Fullmetal Alchemist), comes a new adventure with high-flying action.

Concrete Revolutio kicks off on October 4. 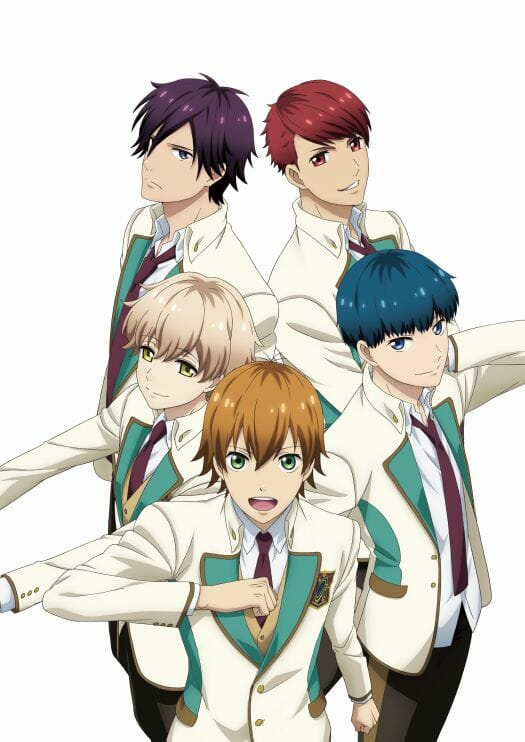 STARMYU is a slice of life comedy based on Ren Hidoh’s manga of the same name. The series is being helmed by Shunsuke Tada (Kuroko’s Basketball) at C-Station. Asami Watanabe (Akame ga KILL!) is providing character designs, while Sayaka Harada takes charge of series composition.

FUNimation describes the project as follows:

Ayana Academy: home of musical dreams and insane competition. New student Yuta Hoshiya dreams of being in show business, but to get there he’ll have to gain acceptance from the Kao Kai (Cherry Blossom Flower Association), Ayana Academy’s three highest ranking students. For Yuta and his friends to get into the music department, they’ll have to get into the Star Frame class, which is taught by the Kao Kai members. Though the newcomers are struggling, they catch the interest of one of the Kao Kai members, which just might send them on the starlit journey they’ve been dreaming of! From director Shunsuke Tada (Kuroko’s Basketball and Prince of Tennis) comes a new show that will have you dreaming of stardom. 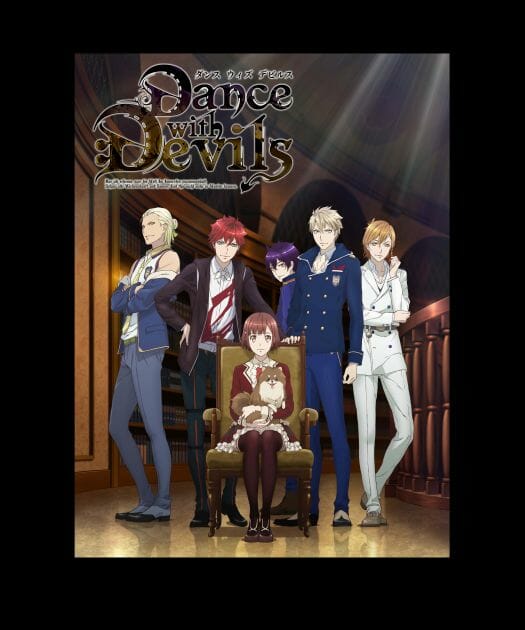 Dance With Devils is an original supernatural romance series by studio Rejet. The title is being directed by Ai Yoshimura(Blue Spring Ride) at Brain’s Base. Yuka Takashina (Inari Kon Kon) is providing character designs on the series, while Tomoko Konparu handles series composition.

From Rejet, the original creator of Diabolik Lovers, and Brain’s Base, the studio behind Princess Jellyfish, comes a devilish tale of high school seduction. Second-year student Ritsuka Tachibana has the perfect school-to-life balance, but all of that’s thrown into chaos when she discovers that several of her handsome male classmates are actually demons in disguise.

Doamayger-D is a short-form sci-fi series that harkens back to the golden age of mecha. The series, which originally aired in the winter 2015 season, was directed by Shimon Doi at studio ILCA. Shimon Doi also provided character designs on the project, while Uuronta Yoshida provided the scripts.

This retro-style throwback is a romping adventure with a sweet setting! In a traditional Japanese sweets shop in Kyoto works Daijiro Kyogoku, the latest young successor in a long line of sweet shop owners. One day, Daijiro finds a giant robot in the shop’s basement called Doamayger-D. Now, villanous robots are on the loose, and the hero we need is Doamayger-D… a candy-making mech?