Welcome, readers, to a post-Halloween AniWeekly! The tricks and treats have been handed out, and the clocks have been set back here at Herald Headquarters. Before the rush toward holiday fun begins, though, we’re here to bring you another week of big surprises and outstanding stories that are well worth your attention!

An unexpected arrest. Voice actress Ai Takabe was arrested for suspected possession of cocaine. The actress previously played the parts of Agiri Goshiki in Kill Me Baby and Fumi Manjoume in Aoi Hana: Sweet Blue Flowers.

Don’t call it War in the Thunder! Popular Gundam side-story Mobile Suit Gundam Thunderbolt is getting an anime adaptation! The series, which is based on Yasuo Ohtagaki’s manga, takes place during the great One Year War.

Did someone say “dubs”? FUNimation unveiled their Broadcast Dubs lineup for the fall season. Attack on Titan: Junior High and the second season of Seraph of the End.

A treasure trove of Macross! Last week, a streaming event was held to promote the upcoming Macross Delta anime series. A wealth of information on the show, including a trailer, numerous piece of art, and the major staff members were unveiled at the event.

Getting back to band class. Kyoto Animation is working on a second season of Sound! Euphonium, as well as a new movie recap of the first season.

I got an A in Justice! An anime adaptation of My Hero Academia is in the works! The series was accidentally revealed on the manga’s Twitter account a few days prior, though the tweet was deleted shortly after it was posted. 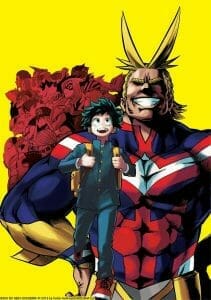 Who is Hideaki Anno? Anime fans of all stripes know the name “Hideaki Anno.” He’s a gifted director, whose list of works includes Evangelion, Gunbuster, and Kare Kano. But what do you really know about the man? Digibro at My Sword Is Unbelievably Dull put together an essay, which traces the great director’s career, while chronicling his personal life outside of Gainax.

The changing face of digital manga. Paige at Organization ASG published a piece which discusses the changes that have swept over the western manga industry, and how companies are standing up to the challenges posed by scanlation groups.

Follow your dream (you’ve got to follow it)! Lauren from Otaku Journalist is hosting a webinar on how to build your perfect geek job. Admission is free, but reservations are being taken for the event, which kicks off on November 8.

If you grew up in the ’90s, then there’s a good chance that you remember the Mega Man cartoon series. It was shoddily animated, poorly written, and just plain cheesy, but people still adored it.

Earlier today, YouTuber OKeijiDragon uploaded the original pitch video for the series, which was produced by Ruby Spears to promote the show to TV networks. It’s an interesting short that’s packed with fun facts, like the cartoon’s $300,000-per-episode budget!