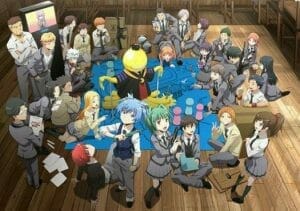 Every great class must end, even those in Assassination Classroom.

The latest issue of Shueisha’s Weekly Shonen Jump magazine published an interview with Assassination Classroom anime director Seiji Kishi. In the piece, Kishi mentioned that the current season of the show will cover the manga through its final chapter.

The first season of Assassination Classroom kicked off on January 9, 2015, and ran for 22 episodes. The current season began airing on January 7. Seiji Kishi (Angel Beats!, Yuki Yuna Is a Hero) will helmed both seasons at studio Lerche. Kazuaki Morita (Fate/Prototype, Arpeggio of Blue Steel) is the character designer on the project, while Makoto Uezu (Arpeggio of Blue Steel, Is This a Zombie?) provides the show’s scripts. The second season started airing Japanese TV on January 10, with the core cast and crew returning to work on the project.

FUNimation currently holds the rights to Assassination Classroom, and offers it on the company’s streaming platform. Funimation is also streaming episodes as they air in Japan, with the broadcast dub running as part of the company’s Dubbletalk block.