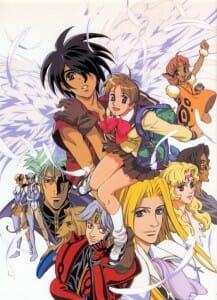 Funimation’s taking fans on a new trip to Gaea!

Earlier today, Funimation’s Kickstarter campaign to produce a new dub for The Vision of Escaflowne reached its $150,000 funding goal. As of press time, a total of $150,168 has been raised from 978 backers, with an average contribution of $153.55.

With the campaign funded, Funimation will release Vision of Escaflowne on DVD and Blu-Ray in both standard and collector’s editions. In addition, the dub will stream on Funimation’s digital platform.

The project still has three stretch goals, which begin at $200,000 total funding:

The Kickstarter campaign first launched on February 27. In an interview with Anime News Network’s Zac Bertschy, Funimation brand manager Jennifer Fu explained the need for a new dub on the series:

Had the Kickstarter not been successful, Escaflowne would have received a Blu-Ray release, albeit as a subtitled-only set.