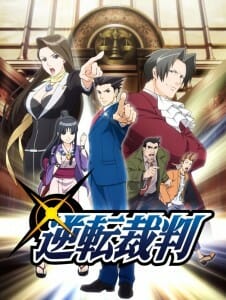 Hold It! The greatest detective can, should, and will come to the west!

Earlier today, Crunchyroll announced that they will stream the Ace Attorney anime series. The show will kick off on April 2, at 4:00AM Pacific (7:00AM Eastern) in all regions outside of Asia.

Ace Attorney is based on Capcom’s video game franchise of the same name. Ayumu Watanabe (If Her Flag Breaks, Space Brothers) is helming the series at A-1 Pictures. Keiko Ōta (Hyakko!) will provide character designs on the project, while Atsuhiro Tomioka (Inazuma Eleven, Pokémon XY) takes charge of series composition. Kaoru Wada (Princess Tutu, Ninja Scroll) is scoring the soundtrack.

Several character art pieces, as well as a 15-second TV spot were released to promote Ace Attorney, which you can check out below.