While the army may get the glory, the merchants do their own part to fight the good fight.

Earlier today, the official Heroic Legend of Arslan anime website updated with a pair of cast announcements. Kenjiro Tsuda will play Graze, while Takahiro Sakurai was cast as Shagad.

Visuals for both characters were released, which you can check out below: 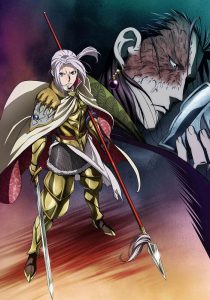 Previously character designs for Arslan, Daryun, Narsus, Elam, Farangis, Gieve, Alfreed, Hilmes, and Jaswant were released to promote the show. You can check these out below: