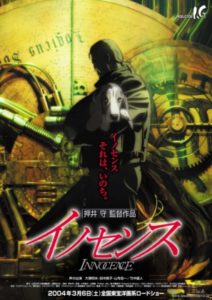 It’s time to return to the world of Mamoru Oshii’s cyberpunk classic.

Earlier today, Production I.G. revealed that Funimation acquired the domestic rights to Ghost in the Shell 2: Innocence. As of press time, Funimation hasn’t divulged details on the license.

Ghost in the Shell 2: Innocence is the sequel to 1995 film Ghost in the Shell. The feature, which was co-produced by Production I.G. and Studio Ghibli, hit Japanese theaters in March 2004. Mamoru Oshii (Patlabor: The Movie, Urusei Yatsura: Beautiful Dreamer) directed the feature and wrote the screenplay. Hiroyuki Okiura (Zillion) served as character designer on the project. Kenji Kawai (Eden of the East, When They Cry – Higurashi) scored the film’s soundtrack.