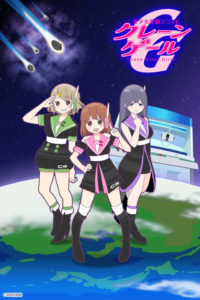 The game center’s open once more, and the crane games are ready for a second play!

Earlier this week, the Crane Game Girls (Bishōjo Yūgi Unit Crane Geeru) anime staff revealed that the series will receive a second season. The series is slated to return to Japanese TV this fall.

Aya Uchida, Akari Kageyama, and Mikoi Sasaki are joining the cast, though their roles have yet to be revealed. In addition, the three main cast members from the first season will reprise their roles:

The show’s crew will more details on the season during a NicoNico live streaming event on August 10.

Earth is about to be destroyed by a meteor! The beautiful Sayo is told by the upper management at her mysterious organization that the only ones who can save the planet are three girls named Kyouko, Asuka, and Mirai. Although skeptical, Sayo brings them together by telling them they’re going to train to be idols. They’re raring to go, but for some reason, she leads them to an arcade…