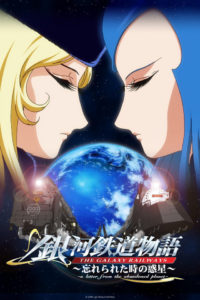 Get ready to take one more ride on the Galaxy Express, as it streaks across the cosmos.

Yesterday, Crunchyroll announced that they’ve added The Galaxy Railways: A Letter from the Abandoned Planet to their digital lineup. The four-episode OVA is available in its entirety for fans in the following regions:

The Galaxy Railways: A Letter from the Abandoned Planet is a 2007 OVA sequel to 2003 TV series The Galaxy Railways which, itself was a spinoff of Leiji Matsumoto’s Galaxy Express 999. Hideaki Oba (Genesis Surviver Gaiarth) directed the project at studio Planet, with Yasuyuki Muto (Afro Samurai, Deadman Wonderland) writing the screenplay.

In the distant future, the planets are now connected with a massive galactic railway system. The Galaxy Express 999 has crash landed on a mysterious planet. On board are The Conductor, Killian, Maetel, and Tetsuro, a ten year-old street urchin with a heart of gold. Now it’s up to the SDF Sirius Platoon to rescue them before the Herise Time Mystery—a rift in the deep axis of time and space—repeats.