Tags: crunchyroll, looking up at the half-moon, right stuf, streaming 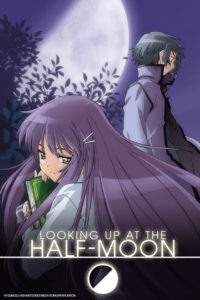 Even in the most dire of situations, that half-moon will always hang silently above as it casts its glow.

Earlier today, Crunchyroll announced that they added Looking Up at the Half-Moon to their digital catalog. The 2006 series is available in its entirety for fans in the United States and Canada.

Even though Yuuichi Ezaki is in the hospital recovering from an illness, he’s constantly sneaking out. One day he’s caught by the head nurse, who makes a deal with him: she’ll overlook his future excursions if he’s willing to befriend a new patient, Rika Akiba. Due to a serious heart condition, Rika has spent most of her life in the hospital, and doesn’t really have any friends. As Yuuichi and Rika spend time together and learn more about each other, their relationship soon blossoms into romance…

In North America, Right Stuf holds the rights to Looking Up At The Half-Moon. They distribute the show through their Lucky Penny Entertainment label.