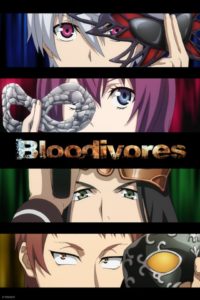 So, are they drinking blood, or eating things with blood, or…?

Earlier today, Crunchyroll announced that they will stream Bloodivores as part of their Fall 2016 simulcast lineup. The series will make its digital début on October 1, at 6:30AM Pacific (9:30AM Eastern).

Bloodivores will be available in all regions outside of China, Japan, and Korea.

Bloodivores is a Japanese/Chinese co-production, which adapts Chinese artist Bai Xiao’s web comic of the same name. Chen Ye is directing the series at studio Creators in Pack, with Masashi Nakamura serving as chief director.

A case of insomnia swept across the globe. As a side effect of the drug developed to suppress this sickness of causes unknown, the “bloodivores” were born. Born from bloodivore and human parents, protagonist Mi Ryu was known as “The Child of Hope” tying bloodivore and humankind together. However, when Mi Ryu is arrested as the principal offender in a bank robbery, he is taken to a special prison operated by the Bureau of Special Threat Management for observing bloodivores. less