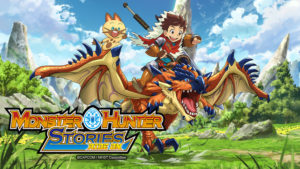 Get your weapon and Felyne partners, everyone. We’re hunting monsters!

Earlier today, Crunchyroll announced that they will stream Monster Hunter Stories: Ride On as part of their Fall 2016 simulcast lineup. The series will kicked off on October 1, at 8:00PM Pacific (11:00PM Eastern).

Monster Hunter Stories: Ride On will be available to subscribers in the following regions:

Monster Hunter Stories: Ride On is based on the upcoming Monster Hunter Stories 3DS game. The game and the series will revolve around “Monster Riders,” who travel the world taming monsters rather than hunting them. The show was unveiled in August, during Capcom’s Tokyo Game Show presentation.

Funimation announced that they acquired the license for Monster Hunter Stories: Ride On at Otakon.