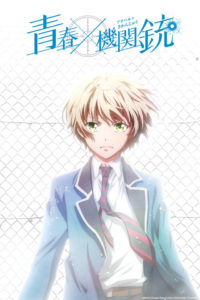 It’s time to meet the members of Toy Gun Gun again… for the first time.

Christopher Ayres is directing the adaptation, with Katelyn Barr writing the script.

Aoharu x Machinegun is based on Naoe’s manga of the same name. The series, which aired during the Summer 2015 broadcast season, was helmed by Hideaki Nakano () at Brain’s Base. Junko Yamanaka () provided character designs on the project, while Kenji Konuta took charge of series composition.

Sentai Filmworks will release Aoharu x Machinegun on DVD and Blu-Ray on November 15. They describe the series as:

When Hotaru Tachibana storms into a host club to avenge the honor of a wronged female student, the last thing Hotaru expects is to duel the club’s most popular host with airsoft guns instead of fists. When Masamune Matsuoka’s experience wins out over Tachibana’s brawn, he realizes that he can use his victory (and the large bill for damaging the club) to make Tachibana join his struggling Survival Gaming team. However, what ladies’ man Masamune totally misses is that his unwilling new guy… isn’t a guy at all! Under the boy’s clothing and strong need to defend justice, Tachibana is all-girl, but, for a number of complicated reasons, she absolutely CAN’T expose that fact to Masamune or his teammate, the erotic manga artist Toru Yukimura. Blood will boil both on and off the airsoft arena, but it’s not over until the last round is shot in AOHARU X MACHINEGUN!