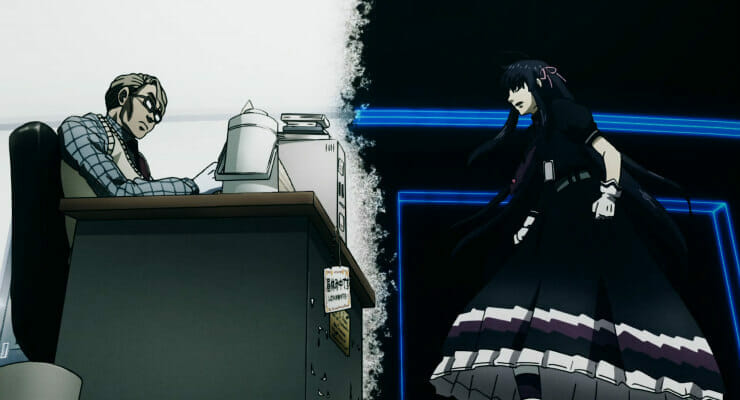 Mike Ferreira: Welcome, everyone, to the latest meeting of the Anime Club. As always, I’m Mike Ferreira, benevolent overlord and emcee. I’m joined this week by Anthony Simpson, L.B. Bryant, and Lydia Rivers
L.B. Bryant: Hey everyone
Lydia Rivers: Hi hi! I forgot my offering tonight. Will I survive to talk about the second episode of Drifters?
Mike Ferreira: Maybe. … *maybe.*
Lydia Rivers: He’s right! He really IS benevolent!
Mike Ferreira: We’re continuing on that Drifters train this week, which is starting to open itself up after that initial exposition. What are your thoughts on the series so far?
Anthony Simpson: The second episode was better than the first IMO in most aspects.
L.B. Bryant: I really enjoyed how much the world was expanded upon in this episode.
L.B. Bryant: Everything that made the first episode enjoyable was boosted even more in this episode including the violence and characters that didn’t get much screen time in the first episode.
Anthony Simpson: The fighting in this episode was great.  Even better than the first episode.
Lydia Rivers: I enjoyed the humor twice as much. It was very pointed in that it allowed us to see a glimpse of the characters that’d be hidden if the series was totally serious all the time. Plus, it just underscored how twisted the story is hinting to be.
L.B. Bryant: The humor in this episode was good but the fight scenes were freakin’ brutal!
Mike Ferreira: Indeed. They’ve really allowed the humor to work in ways that make you realize that these just aren’t good people.
Anthony Simpson: I’m going to be the odd man out here.  I didn’t care for the comedy again in the second episode.
Mike Ferreira: Seeing that goofy moment where Nobunaga’s bullshitting with Nasu no Yoichi, only to cut to Toyohisa BEATING the knight down with his scabbard was just a beautiful dissonance 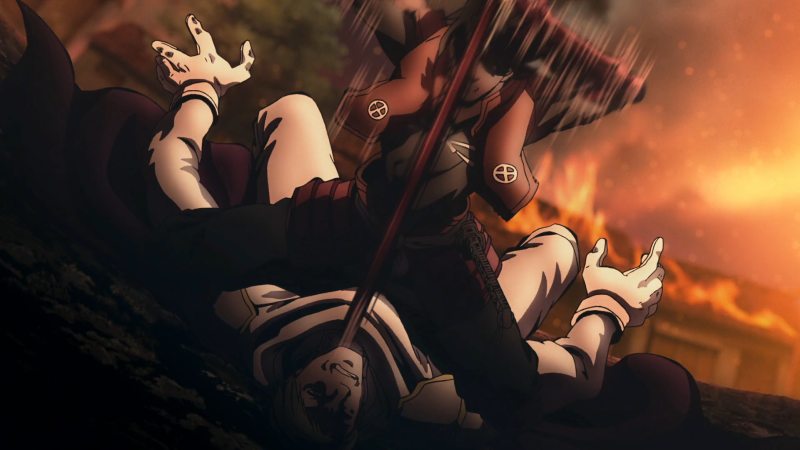 Lydia Rivers: Oh! Speaking of that scene! I really, really like the camera directing choices in this one too. Sometimes it looks like it’s going to be iconic in the first episode, and then flattens out. Not so!
L.B. Bryant: Agreed. I’m not sure if there is truly a “hero” in this series yet; maybe there will be down the road but at the moment there’s just not which makes me a little worried that this series is going to lose its appeal once the shock factor of the violence goes away. I’m really hoping that at some point our main character is turned a bit more “heroic”.
Mike Ferreira: Something tells me that, like Hellsing, there will be no heroes… everyone is legitimately awful, some are just less awful than others. 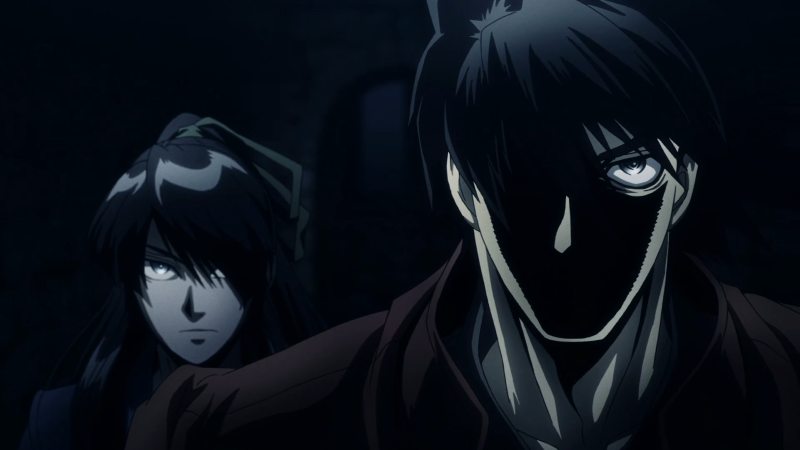 L.B. Bryant: I can live with that I think heh
Mike Ferreira: I mean crap – it opens with Hannibal beating the crap out of Scipio Africanus – no reason, they’re just pissed at each other over their famous battle from thousands of years ago
Lydia Rivers: I honestly hope no one will be a hero. You don’t get to be a leader without being some kind of bastard or another. One man’s hero is another man’s bastard. I enjoy the perspective swaps.
Anthony Simpson: I get the feeling that there isn’t going to be a hero either.
Mike Ferreira: I think the closest thing to a hero will be the two in the office… hallway… thing
Mike Ferreira: Easy and Murasaki?
L.B. Bryant: Perhaps our friendly office worker in the white suit and glasses is actually the hero we should be rooting for since it was revealed that he’s doing battle with the goth loli?
Anthony Simpson: That said I did read the Wikipedia page for the series and there are some interesting historical characters who end up on the same in this thing.
Anthony Simpson: same side.
Mike Ferreira: Did anybody else notice that the goth loli’s totally wearing an employee badge? 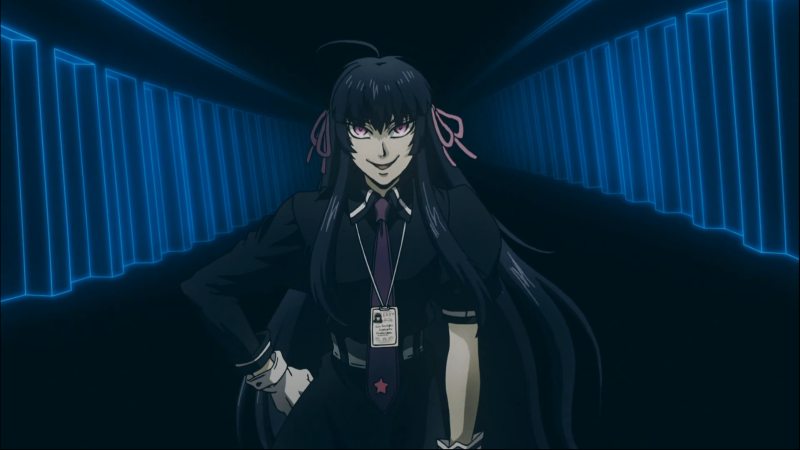 L.B. Bryant: Yes I noticed that.
L.B. Bryant: I was very curious about that but don’t want to speculate on it quite yet.
L.B. Bryant: Either way I hope those two get more screen time in future episodes.
Lydia Rivers: I don’t know. In that scene I didn’t so much see the potential for heroes as two people talking shit about chess. At least, that’s the impression I felt.
Mike Ferreira: Agreed. The interplay was great between them
Anthony Simpson: I enjoyed the interplay as well.
Mike Ferreira: Well yeah… this is all some cruel chess game for them – but I can’t help but wonder why, and well… what led to this situation
L.B. Bryant: Someone stole the other’s lunch from the employee break room?
Lydia Rivers: Someone got the cushy desk job over the other someone and can actually take coffee breaks?
Mike Ferreira: …poor Easy’s probably in IT or something.
Anthony Simpson: I want to mention that I was glad to see more the demi-humans in this world.  I feel bad for how shitty their situation currently is.
Mike Ferreira: I was more happy to see that Toyohisa gave the demi-humans their dignity back
Anthony Simpson: I was glad to see that too.
Anthony Simpson: My eyebrows raised a bit when they mentioned Hobbits in the subtitles.
Lydia Rivers: I was happy to see that they didn’t feel relieved to have their dignity back. They just felt…like they could move on.
Mike Ferreira: Yeah… it was clear that it wasn’t a happy time, but it was something that needed to be done for everyone
Mike Ferreira: Re: Hobbits Those are gonna be some sad, oppressed, hairy-feeted little people
Mike Ferreira: You know, though… I genuinely adore Oda Nobunaga in this series – he’s so snarky, but genuinely likeable
Lydia Rivers: Likeable because he’s so honest?
Anthony Simpson: I’m really liking him.
Mike Ferreira: Honest and devilishly intelligent 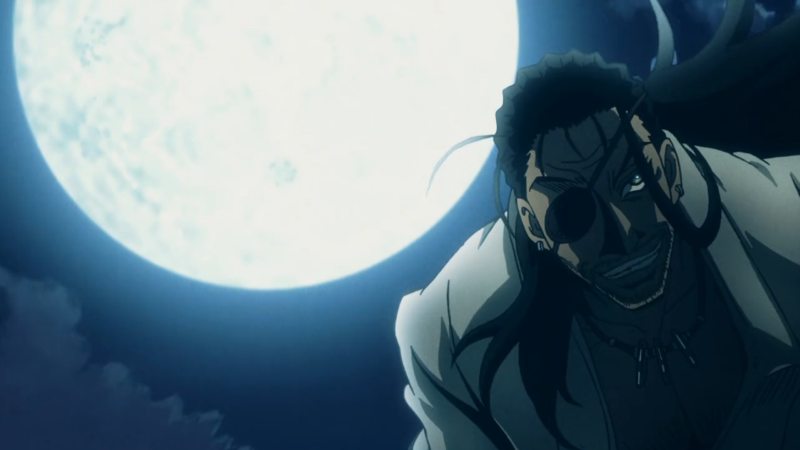 L.B. Bryant: So, if I might ask this of everyone… has anyone else been paying attention to the awesome background music created for this series by Hayato Matsuo and Yasushi Ishii? One moment it’s jazzy as the blood flies, the next it’s melancholy as a knight is having his forehead caved in. This is a series where I might seek out the soundtrack to see if it plays as well out of context as it does within the series.
Lydia Rivers: Honestly, and perhaps to my shame, I have been so pleasantly overwhelmed by the visuals that I haven’t noticed it too much. That will undoubtedly change on subsequent viewings.
L.B. Bryant: I’m kind of a nerd for BGM in anime. heh
Mike Ferreira: Oh man, yeah… the music is incredible – it’s a fantastic complement to the show, as a whole. It’s subtle when it needs to be, but that battle theme just gets you into the moment

Anthony Simpson: I haven’t noticed the music either, but similar with Lydia I’ve been focusing too much on the visuals.
L.B. Bryant: When you watch the third episode, try to pay attention to the music during the battle sequences. It’s really very well done. :)
L.B. Bryant: Really sets a great tone.
Mike Ferreira: At parts, the two have a wonderful mix between them – the battles flowing on the rhythm of the music, the grotesquery of the more serious scenes enhanced by those melancholy tones
L.B. Bryant: I can agree with that.
Lydia Rivers: I will! Thanks for the heads up! So, what’s with the older elf brother guy? Do you think he’s going to turn into a right hand man?
L.B. Bryant: If anyone is going to take on that role, it might as well be him.
Mike Ferreira: I’m not so sure, there.
Lydia Rivers: It’s really hard not to go get spoilers from the manga, but I think I’ll abstain so I can live totally in the deliciously directed moments, hehe.
Mike Ferreira: I see the elf brothers becoming decent sub-characters – comic relief when needed, but I don’t see rising to major roles.
Anthony Simpson: On one hand I wouldn’t mind him turning into a right hand man, but on the other hand part of me doesn’t want that to happen.
L.B. Bryant: Someone is going to have to act as a ‘go between’ or even possibly something resembling an ‘ambassador’ for the demi-humans now that the Drifters have started to claim their land and empower them for lack of a better term.
Lydia Rivers: I wonder if that job will fall to the observer from that (neutral?) organization, the token big boobs character.
Mike Ferreira: That’s what I was thinking
Mike Ferreira: The Octobrist girl will probably be the go-between 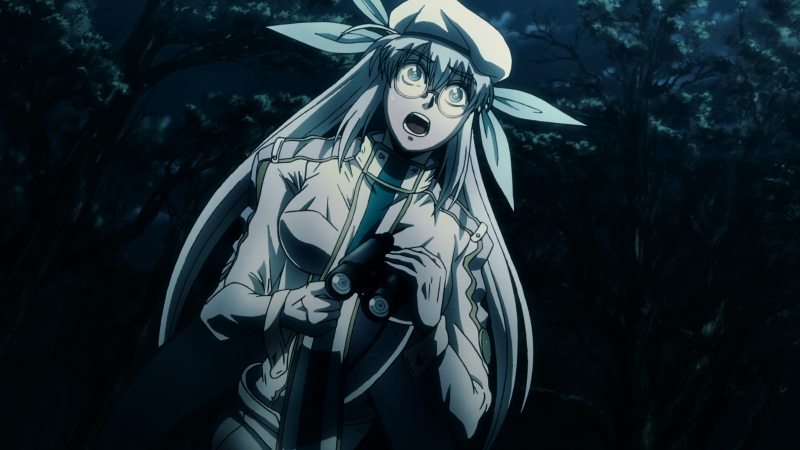 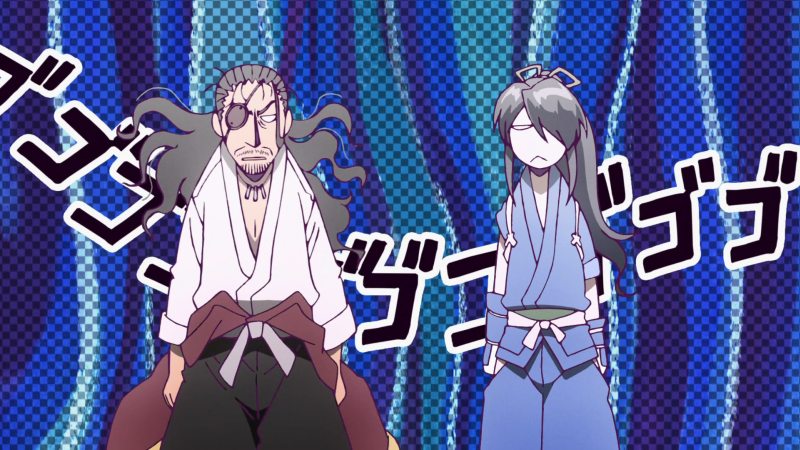 Lydia Rivers: You know, I really appreciate Drifter’s intensity for more than entertainment to be honest. IRL these people died young, and violently, for better or worse. And for better or worse, they had an effect on human history. Any representation of them should be intense.
Anthony Simpson: I agree Lydia.
Mike Ferreira: Well said.
Lydia Rivers: And that’s partly where the humor comes in. They’re on their way to go meet death, and mete death, and joked competitively about age-related fatigue. It may seem really abrupt, and some of the jokes might miss because of cultural things, but man. Finding something to enjoy in every moment is certainly a way to be alive.
Mike Ferreira: And those crazy diamonds are shining right on.
Lydia Rivers: Hehe. Is it weird that I idly wondered how they all find blacksmiths to repair the wildly different armors and weapons?
Mike Ferreira: “how do you fix these?” “…pluck the chicken then I’ll show you a guy T____T”
Lydia Rivers: OMG your lordship! They were DUCKS OK
Mike Ferreira: I stand corrected. They were ducks.
Anthony Simpson: I could go with a wizard did it.  My guess is either that Octobrist does something or they have hammer space.
Lydia Rivers: Hmpf. Poultry everywhere acknowledges your efforts. Not everyone had access to McDonald’s back in Nobunaga’s day.
Lydia Rivers: re: blacksmiths, oh yeah! Or maybe dwarfs we haven’t seen yet. “Demihumans…” I so prickled when I heard that. Grrrr.
Mike Ferreira: Maybe that’s why they enslaved the village (kidding)
Mike Ferreira: It looks llke we’re coming up on time, so any closing thoughts for this week’s episode?
L.B. Bryant: The closing moments of this episode in the white hallway was possibly one of the most interesting and compelling moments of this series so far. More of that please.
Mike Ferreira: Definitely. More Easy and Murasaki, please! 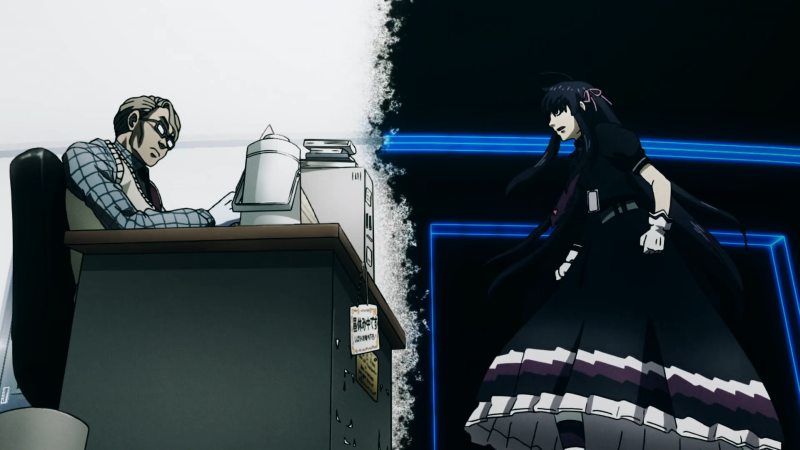 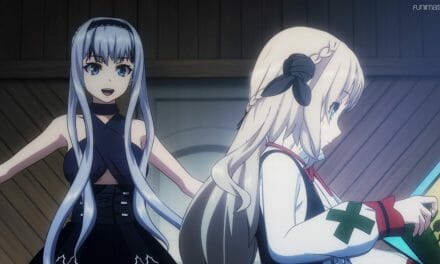 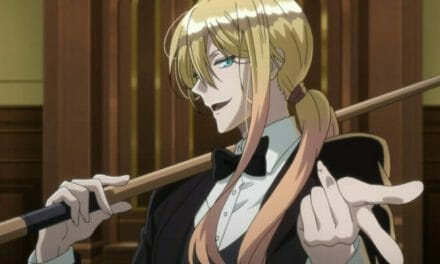 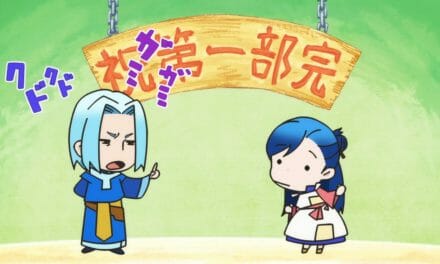 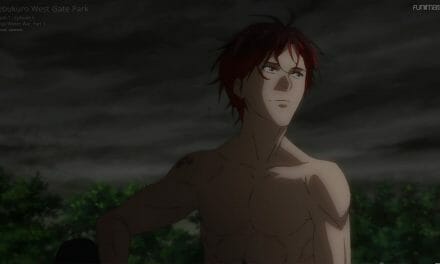