Tags: grimgar of fantasy and ash, hobby japan, i saved too many girls and caused the apocalypse, j-novel club, overlap

Whether you’re looking for fantasy action or time traveling antics, J-Novel Club has you covered.

Earlier today, J-Novel Club announced that they acquired the global digital rights to two new light novel series. The company will publish the following under their banner:

Both titles are currently available to J-Novel Club subscribers. Non-subscribers will be able to read the first chapter for free, though future installments will require a subscription. 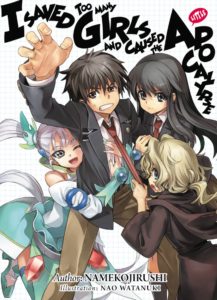 I Saved Too Many Girls and Caused the Apocalypse began publication as one of Hobby Japan’s flagship titles, seeing 15 volumes released over the course of ten years. The most recent book, volume 16 is slated hit Japanese retailers on October 29. The title inspired a manga adaptation by Koji Hasegawa, which currently runs in Comic Dangan magazine.

Rekka Namidare was a normal boy until his sixteenth birthday. Then a girl suddenly appears from his future, warning him that he’ll somehow start an interstellar war! It turns out Rekka hails from a special bloodline that’s destined to get caught up in all kinds of trouble. Whenever a story’s heroine is in dire need, Rekka will be given one last chance to save her. And in the future, Rekka will have saved so many girls that their jealous love for him will cause the apocalypse!

J-Novel Club opened their doors on October 14. The publisher specializes in English translations of Japanese light novels, which they will deliver in a “streaming” subscription format.

Subscriptions are offered in two flavors: Membership and Premium Membership.

The company kicked off its operations with four titles: