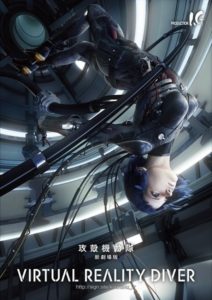 You know, any jokes here would just get super meta.

Yesterday, Production I.G. unveiled the English dub cast for its upcoming Ghost in the Shell The Movie Virtual Reality Diver film. The feature will star the following:

Ghost in the Shell The Movie Virtual Reality Diver is an original film based on Masamune Shirow’s Ghost in the Shell manga. The feature will be a 15-minute film, offered in immersive 360° 3D video, which can be viewed with a Virtual Reality headset. Production I.G. aims to release the feature worldwide in the near future as an app on the Google Play and iTunes storefronts.

The app hit Japanese app stores earlier this year with a 480 yen ($4.63 USD) price tag. The studio is also aiming for a release on PlayStation VR and other high-end VR headsets.

Ghost in the Shell The Movie Virtual Reality Diver is a collaboration between Production I.G. and the following individuals:

Hiroaki Higashi is the director on the project, which features character designs by Kazuchika Kise. Jun’ichi Fujisaku is credited with the role of “construction.”

“To end the war and protect my wife, I must delete you all…”
Japan, 2025. Technology has been advancing more and more rapidly.

“Brain cyberization” that makes possible direct connections to information networks via the brain, the technology of “prosthetic bodies” that allows humans to change their body parts into cybernetical ones; in this world where such scientific advances have become common, a bombing attack threat is sent to the Japanese government.
The target is an international meeting involving dignitaries from the Republic of Kuzan. The case is entrusted to the Ministry of Home Affairs’ Public Security Section 9.

Section 9’s leader, the full-cyborg Motoko Kusanagi, assembles her team and heads off to trap and eliminate the terrorist.

The studio released two trailers for the project, which you can check out below: