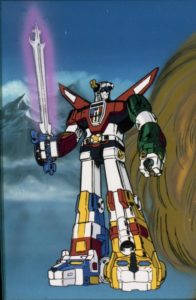 Otacon! Universal got a new gift from its latest studio buy, but I can’t find Metal Gear anywhere!

Solid Snake actor David Hayter (X-Men, Watchmen) is attached to the project as a writer.

Deadline reports that the title is in active development, though Universal will make the final decision as to the project’s direction on completion of the script.

Voltron was originally produced as a joint venture between World Events Productions and Toei Animation. The series ran on syndicated networks from September 10, 1984 through November 18, 1985. The show’s first season adapts Beast King GoLion, which aired in Japan from 1981 through 1982. The series was directed by Katsuhito Taguchi, and features character designs by Kazuo Nakamura. Media Blasters holds the rights to both Voltron and Beast King GoLion in North America.

Dreamworks Animation debuted a reboot to the franchise, Voltron: Legendary Defender, as a Netflix Exclusive on June 10. A second season is in the works, and on track for a January 20, 2017 premiere.