You know, I don’t care if it’s taken from Dragon Ball Super, this delightful hype train image is getting some more mileage today.

Yesteday, Funimation announced that Adult Swim will air Dragon Ball Z Kai: The Final Chapters as part of their Toonami block. The series will kick off on January 7, at midnight Eastern. 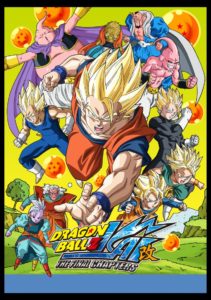 The final episode of the first season was released as an OVA, as its broadcast was cancelled by the Tōhoku offshore earthquake and tsunami.

Seven years have passed since Cell’s defeat, and the Z Fighters have returned to normal life. Goku has continued his training in the Other World, Krillin has gotten married, and Gohan has his hands full attempting to navigate the pitfalls of high school. But with the new World Martial Arts Tournament about to begin, it’s time for Goku and the Z Fighters to reunite and face off against the greatest warriors on Earth!

Meanwhile, the evil wizard Babidi has traveled across the galaxy on a quest for revenge, hoping to fulfill his father’s thwarted dreams of universal domination. The Supreme Kai has come to enlist the aid of the Z Fighters in his effort to prevent Babidi from awakening a monster of unimaginable terror—Majin Buu!